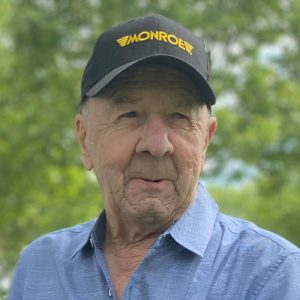 It is with great sadness we announce the sudden passing of Bill Sass, husband, father, Gedo, uncle and friend on April 20, 2022.  He is predeceased by his wife Elizabeth.

Bill was born April 13, 1939, near Ituna, Saskatchewan on the family farm, child 13 of 15.  He had 7 Brothers & 8 Sisters.  Bill lived on the family farm and then moved to Yellowknife, NWT to work for Ward Air loading & unloading freight.  He had many stories from his time there, and he would tell you them frequently.  He then moved to Edmonton, AB and that is where he met Elizabeth at a farm wedding, and they were married in 1967.  In 1972, Bill moved the family to Kelowna, BC to start working at Rutland Esso as a mechanic and then continued working at several service stations throughout Kelowna before opening his own automotive repair shop in the early 1980s.  He was known for his honest and reliable work ethic that carried through to his retirement in 2016 at Little Billy Auto Repair.

As luck would have it, Bill met Phyllis by chance at a BBQ in 1998 in Kelowna while she was visiting from Ontario.  They hit it off and Phyllis moved to Kelowna shortly after, where they shared many happy years together.

Bill was an avid CFL fan of his beloved Saskatchewan Roughriders and NHL’s Toronto Maple Leafs.  In his retirement, if you were at the house you would probably find some sporting event on the TV, and he would give you a play by play of what had happened during the game.  He loved playing pool, darts, and later Bocce games in the backyard.  Bill was very competitive regardless if you were 5 or 95. He could be heard hooting, hollering and doing his victory dance.

You could always find Bill at meat draws and playing pool at the Kelowna Army & Navy and Kelowna Elks Club. He was a member for many years and was proud when he received his 48th year member pin at the Army & Navy.

Bill is survived by his partner Phyllis; daughters Debbie (Tobi) Friesen, Colleen (Ray) Hill, Jackie Fitzsimons and Simon Fitzsimons.  He was very proud to be Gedo to Sarah, Piper and Orla.

In lieu of flowers, donations can be made in Bill’s name to the Kelowna General Hospital Foundation.

A Funeral Service and reception will be held on THURSDAY, APRIL 28, 2022, at 10:00 AM (PDT), at SPRINGFIELD FUNERAL HOME, 2020 Springfield Road, Kelowna, BC. A viewing will be held prior to the service at 9:00 am, should anyone wish to say their farewell to Bill. Internment to follow at Kelowna Memorial Park Cemetery after the reception. If you are unable to attend in person, please join the family online by Livestream at the time of the service (see below), a recording will be made available to view shortly thereafter.


The service for SASS, William is scheduled for THURSDAY, APRIL 28, 2022, at 10:00 AM (PDT). Below you will find the map for the service location and the contact information should you have any questions.