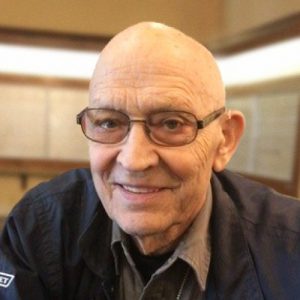 Frank was born in Robin Hood, SK to William and Rose Schnitzler, he passed away in West Kelowna, BC on November 15, 2021.

Frank was predeceased by his wife Ida in 2016.  He leaves his son Wayne (Shelley) and daughter Marie (John); grandchildren Garrett, Bradley, Wesley, Ryan, Lisa, Emma, and Jessie; 5 great-grandchildren; brothers Jim and Ron, and sister Margaret; and several nieces and nephews.  He was, also predeceased by his sister Frances, brother Raymond, sister Caroline, and brother Joseph.

Frank worked as a Sawyer for Flavelle Cedar for his entire career.  He was also a volunteer firefighter in Surrey, BC for over 20 years.  He was a handyman who enjoyed helping his many family, friends and neighbours.  Frank always had a smile on his face and enjoyed his days at the ice rink.

Frank and Ida moved to West Kelowna in 1997.  There, he enjoyed gardening, hockey, woodworking, and being involved with his grandchildren during his retirement.

Thanks to the amazing staff at Lakeview Lodge for their care for Frank over the past year.

A service will be held in Saskatchewan in the Spring where he will be laid to rest with his wife Ida.