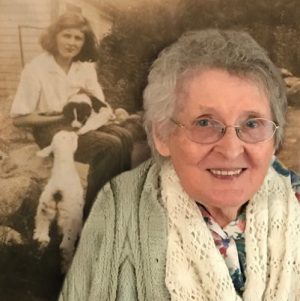 In 1960 she married Harold Bradford, who had five children. For the first two years of their marriage they lived in Lamming Mills, and from there they moved to Grandview Flats. Two more children were born to this union. In 1976 they moved to Kelowna.

She married Bert Schram in 1989 and had a happy three years with him before he passed. She cherished and loved him and his family dearly for the time they had.

Josie was a loving mother, grandma, great-grandmother, sister, aunt and friend. She was a hard worker, loved helping people and would give the shirt off her back if there was someone in need. She sponsored children overseas, knitted over 120 baby sweater sets for iServe in the last few years of her life, and helped out in various other capacities in her church. Josie’s love of gardening showed with her bountiful vegetable garden and her beautiful flowers. She was a woman of God with a strong faith and kind heart. She was loved by many.

A celebration of life for Josie will be held when Covid-19 restrictions are lifted.