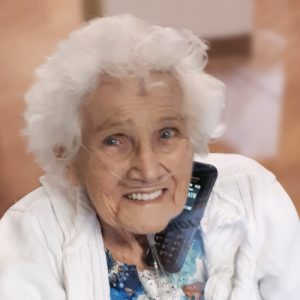 Mom’s work on earth is complete. Saturday the 27th of March she received an invite, an offer she could not refuse, an appointment from which she will not be returning. This opportunity comes with unbelievable perks of a reunion with family and friends she has not seen in decades and in time for Easter, her favorite time of year and to be with the Lord every day all day.

Our family is saddened and heavy hearted to acknowledge the peaceful passing of Esther on Saturday 27th day of March. Mom would have been 96 this year.

Esther is survived by her three daughters, Sheila, Bev, and Sandra and their families, nieces, nephews, grandchildren, great-grandchildren as well as a sister, Clara and a brother, George.

Esther was born on October 10th, 1925 in Rosthern Saskatchewan into the large Kinzel family. She was the 10th child of 14, 6 girls and 8 boys. She loved to play hockey and softball with her brothers and sisters.

She married Rudy, sharing life with him raising three daughters until his early death at age 51. Mom was a widow at age 44.  Work ethic was primary in her life. She did not adhere to gender norms. She was an accomplished Office Manager while caring for her home and children.  Multi-talented she loved painting houses, fixing appliances and even helping shingle a roof. Never idle, she was an avid, lifelong seamstress making clothes for her family, knitting, crocheting as well as making quilts recycled from scraps of fabric and clothing, then donating them to charity.  Always teaching and sharing she passed her knowledge on to her family.  She always found time to volunteer at the Church Auxiliary, Hospital Auxiliary and also at the Food Bank.  She loved her 69 Chrysler Newport and did enjoy travelling in her car.

Moving from Saskatoon to Kelowna in 1968 as an owner and manager of an orchard she could never quite accept the apples lost to decay when they fell from the trees. Her garden was bountiful after turning Glenmore clay into a fabulous garden that produced vegetables and fruit which she preserved to last the year. Her Jam Jam cookies, pickles and apple juice were particularly popular. Need I mention what a great cook she was too.

Her “Golden Years” focused on “making it work”.  Having dealt with debilitating Rheumatoid Arthritis as a very young woman and mother she never let it define who she was.  She followed her mother’s advice of not letting it beat you, meeting the world head on accepting life’s challenges with passion, determination and success.  Her mother was instrumental in her life, teaching her honesty, frugality, sharing and as well as having strength through pain. These values were practiced daily and passed down to her three girls.

Even in poor health she emitted her strength as a matriarch. We will all miss her very much as we continue to follow her as our role model.

Charitable Donations in Esther’s name can be made to the Kelowna Food Bank, cofoodbank.com.

A Graveside Service at Lakeview Memorial Gardens will be held to honour Esther; due to the current pandemic restrictions it will be by invitation only. However, the family would like to invite all who want to pay their respects to join online by Livestream on MONDAY, APRIL 5, 2021, at 1:00 PM PDT (see below), a recording will be made available to view shortly thereafter.