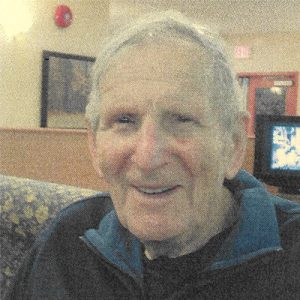 On December 22, 2019, Oscar Schwendimann joined his loving family in heaven. He was predeceased by his father Johann Heinrich; mother Martha; brothers Hans and Ewald; and sisters Nelly and Alice.

Born in Zurich, Switzerland on February 2, 1928, Oscar’s love for horses predetermined his apprenticeship as a Blacksmith where he learned to weld on the forge. He immigrated to Canada when he was 25 years old and had no trouble finding employment as a welder. He worked for several years at Ramsey International in Aurora, Ontario and eventually became foreman. He retired in 1992. His first marriage at 31 years of age ended in divorce but produced 3 loving children – Cynthia Alice “Cindy” of Zurich, Switzerland; Alan (Karen) Roy “Al” of Edmonton, Alberta; and Michael James “Mike” of Barrie, Ontario.

He will be sadly missed by his 3 children; his 2 grandchildren Jeffery and Jaclyn; his step grandson Gordon Tonner; and his grieving second wife and love of his life for 35 years Diane Elizabeth “Liz” Camella Tonner Schwendimann (née Binns).

Special thanks to Al Schwendimann (who flew in from Edmonton) and Dale Tonner, Liz’s son from her first marriage who was there for her when needed, also to the loving care of the nurses and staff at Spring Valley Care Centre where he lived for the past year suffering from dementia and diabetes, and the Kelowna General Hospital staff where he spent his last week with an undiagnosed infection.

A Funeral Service/Celebration of Life will be held at Springfield Funeral Home, 2020 Springfield Road, Kelowna, BC, at 1:00 pm on Sunday, February 2, 2020 which would have been Oscar’s 92nd birthday. In lieu of flowers, please make a donation in Oscar’s memory to Variety, the Children’s Charity, www.variety.ca, or a charity of your choice.

Send Condolences
Send Flowers or a Sympathy Card
In lieu of flowers, please make a donation in Oscar’s memory to Variety, the Children’s Charity or a charity of your choice. Link: www.variety.ca


The service for SCHWENDIMANN, Oscar is scheduled for 1:00 pm on Sunday, February 2, 2020. Below you will find the map for the service location and the contact information should you have any questions.