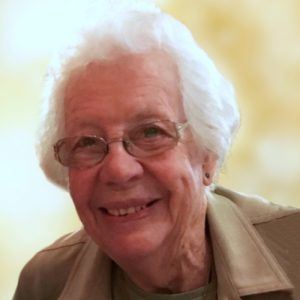 It is with extreme sadness that we announce the peaceful passing of our beloved mother, grandma, great-grandma, sister, aunt, and true friend to many. ♥  At 91 Mary lived her life to the absolute fullest, spending time with her loving family, playing bridge with her many friends, attending plays, musicals, and theatre, and donating her time by serving tea on Sundays. She had a quiet loving demeanor and was the glue that held our family together. She was a true inspiration, and her strength, wisdom, and courage will live on through all of her loving family.

Born on August 8, 1929, to Roger and Gladys Ronson in Rosetown, Saskatchewan, she was the youngest of four beautiful daughters. Mary spent many years working and living in Okanagan Center.  She loved spending time on her farm, working in the vineyards, and managing many acres of land.  She especially enjoyed traveling, camping, puzzles, and fishing with her family.  In her later years of retirement, she moved to the Good Samaritan Mountainview Village where she remained for 18 years and met many wonderful friends.

Special thanks to all the doctors and nurses at the Kelowna General Hospital (4 East) that have cared for her over the last 3 months. Your support truly meant the world to us.

In accordance with Mary’s wishes, there will be no formal service.  In lieu of flowers, donations can be made to your local SPCA, spca.bc.ca.

We love and miss you so much. You are in our hearts forever!

Your hugs were like no other and will be greatly missed