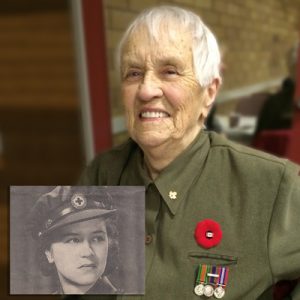 Norma passed away peacefully on Tuesday, May 28, 2019 at the age of 97. She is survived by her loving family of 4 sons: Ian (Yvonne), Keith, Michael (Sharon), Donald (Helen); 11 grandchildren: Michelle, Craig, Emelia, Jordan (Lori), Landon (Brenda), Erin (Rebecca), Kami (CW), Sean (Sydney), Nicole (James), Nick and Rory; and 8 great grandchildren. She was predeceased by her husband Harold (Hal) April 7, 1994; her brothers Ian and Murray; and her daughter-in-law Jane.

Norma was born and raised in Saint John, NB the daughter of Dorothy Barnes Andrew and John Watson Andrew.  She was proud of graduating from Grade 12 with senior matriculation and winning the provincial mathematics medal.  She was the first Canadian Red Cross Corps member, which she joined in 1941, from Saint John to go on overseas duty with the corps. She held the rank of 2nd lieutenant – women in uniform were given officer rank and she was a member of the nutrition section. She married Hal Shepherd in 1945 while they were both still in uniform. In 1947 they moved to N. Quebec, in 1953 to Cold Lake, AB and in 1957 to Banff, AB where Hal became a park warden for the National Parks. Norma lived in some remote areas in BC, AB, and SK but she and her husband managed to educate and support their 4 sons. She achieved her pilot license in 1973. Retirement took her and Hal to Sicamous, BC for 5 years and then to West Kelowna (Westbank), BC and then Kelowna, BC until her death. She and Hal were active members of the Kelowna Yacht club with their boat Commander and the Royal Canadian Legion.

Norma was famous for her orange buns, her skills in bridge, and crossword puzzles. She drove until age 95 and was an avid reader, reading a different book every few days. Her other claim to fame was being hit by lightning – not once in her lifetime but twice!  Mom, grandma, great grandma will be very MUCH missed by her sons and their spouses, grandchildren, and great grandchildren.

Cremation has taken place and a celebration of her life will be on Saturday, August 3, 2019 at 4:00 pm at Springfield Funeral Home, 2020 Springfield Road, Kelowna, BC.  In lieu of flowers, donations in her memory can be made to the Canadian Red Cross, www.redcross.ca or to your charity of choice (she supported many!). A special thank-you for the recent care to the staff of Cottonwoods and to Dr. Alexis Thomson.

THIS SERVICE WILL BE LIVESTREAMED SATURDAY AUGUST 3 AT 4:00PM

Send Condolences
Send Flowers or a Sympathy Card
Canadian Red Cross or to your charity of choice (she supported many!) Link: www.redcross.ca


The service for SHEPHERD, Norma Alleyne is scheduled for Saturday, August 3, 2019 at 4:00 pm. Below you will find the map for the service location and the contact information should you have any questions.