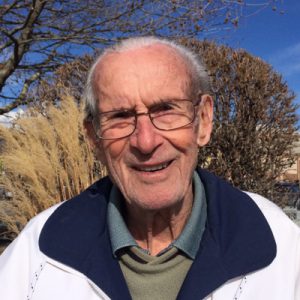 It is with great sadness we announce the passing of George Sherstobitoff. He was the loving, caring husband of the late Lucy Sherstobitoff, his wife of 67 years, a wonderful father to his three children, a cherished grandfather and great-grandfather, and a dear friend to many. He passed away peacefully on Tuesday, December 22, 2020 with his family by his side.

George was born on March 21, 1927 in Glade, BC to his parents Alex and Mary Sherstobitoff. Growing up, he helped his mother on the family farm and was an incredibly bright student in school, especially in math, which would serve him well in his future construction career.

In his youth, George enjoyed playing outdoor hockey with the Glade Beavers and secured his first job as a carpenter. He began his construction career by working on numerous homes near Trail, BC.

As a young man, George travelled seasonally to the Okanagan with his future wife to work in the orchards. On August 8, 1948, this handsome, charismatic man married his beautiful, longtime sweetheart, Lucy Wasilenkoff. During this time, he was introduced to Leo Douillard, the owner of Douillard Construction in Kelowna, BC, and was offered a job that he held proudly for 25+ years, both as a foreman and superintendent. George had an illustrious career in construction, having contributed to the building of many commercial structures throughout the Okanagan Valley and other parts of British Columbia. A skilled carpenter and craftsman, his impeccable work ethic was unparalleled.

George and Lucy also took care of a 12-acre orchard in Lakeview Heights where they worked together tirelessly and passionately for over 40 years. George, with the help of friends and neighbours, built the family home on a beautiful lot near Mount Boucherie in the mid ‘60s where he and Lucy brought up their children and lived until their final days. He took great pride in caring for his land, from the orchard to his pristine home and surroundings.

Family was everything to George; he devoted his life to supporting and providing for his family and was a true role model. He cared for Lucy, the great love of his life, through her final days. He was extremely close to his children, who he spoke to on a daily basis, and loved spending time with his grandchildren and great-grandchildren. He had countless friends and touched the lives of so many through his kindness, sense of humour and generosity of spirit. He was loved and adored by everyone he met.

George was an avid fisherman and enjoyed fishing with family and friends at Pender Harbour, Poett Nook, Kyuquot and many BC lakes. He was especially proud that his famous smoked salmon was served to the Queen of England in March 1983.

George and Lucy loved to travel, and their holidays in Hawaii provided cherished memories. They were excellent hosts and loved to celebrate important milestones with family and friends. George enjoyed an active and social lifestyle through water skiing, curling, square dancing, snowmobiling, and bowling and was a lifetime member of the Westbank Yacht Club. He was also a very devoted sports fan.

In recent years George valued the time he spent with friends at Tim Hortons and Chances Kelowna casino. He truly enjoyed chatting with old friends and meeting many new ones.

George loved to golf and was a lifetime member of Gallagher’s Canyon Golf Club, and recently received Honourary Member status. He golfed over 50 rounds this year alone. He was especially proud of his relationships with the golfing community there, and felt that building the original clubhouse in 1980 was his most satisfying construction achievement. The family would like to thank the staff and golfers at Gallagher’s for the love, recognition and respect they showed George through the years.

A celebration of George’s life is planned for the summer of 2021 in Kelowna, B.C.