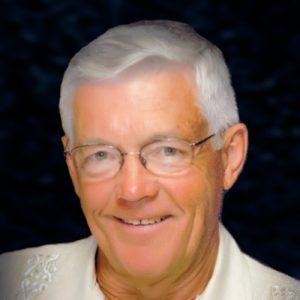 George was born & raised in the Moncton, New Brunswick area. He graduated from Dorchester High School in 1956 and joined the Royal Canadian Air Force. He served from 1956 till 1964. On December 12, 1959, he & his high school sweetheart, Joyce Armour, were married. When he left the RCAF he joined the Co-operators and was employed with them from 1964 until his retirement in 1993.  After retirement, he and Joyce moved from Regina to Kelowna.

George is survived by his wife, Joyce; son Shawn; daughter Cheryl (Bruce) Rempel; son Jim, sister Carole (Hary) Dhillon; sister-in-law, Gail Sherwood; grandchildren, Steven, Lindsay (Nathan), Stacey (Derrick), Jessica, and Taylor; as well as his great-grandchildren Alia, Luka, and Leyton, and his many nieces and nephews. George never had the opportunity to meet Leyton, as he just arrived on January 1, 2022. He is predeceased by parents, Wellington and Carmel; daughter, Audrey in 1988; and brother David (Gail) in 2018.

Although retired George remained active. He was a member of the Bristol Gardens Strata and collected the recycling for many years and donated the proceeds to the Pacific Assistance Dogs Society (PADS). He also volunteered many years at The Bistro at Kelowna General Hospital. His hobbies included gardening, camping with Sam’s Highway Knights, square dancing with Winfield Whirlers, and playing cards or dice with friends. After moving to Kelowna, he & Joyce cruised to many foreign ports or spent part of the winter in a warmer climate.

George was a hard worker and is remembered for his quick wit and sense of humour. He always had a joke to tell & met many people while on walks with his previous dog Rusty or current dog William. Many residents of Bristol Gardens might not have known George by name, but they always knew Rusty or William.

A Celebration of Life for family will be held in Regina, SK at a later date.

Flowers are graciously declined. In lieu of flowers, a donation can be made to Pacific Assistance Dogs Society (PADS), or a charity of your choice.

Thanks to the first responders (Firefighters, RCMP and Paramedics), and special thanks to Sabrina, Ann, and Gertie.