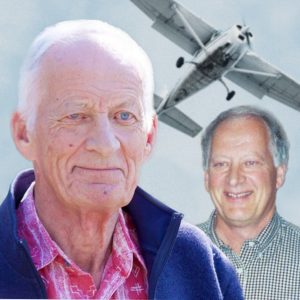 It is with great sadness that we announce the passing of Garry G. Skelton in Kelowna, BC on Sunday, January 17, 2021, with loved ones by his side.

Garry was predeceased by brother Blaine Skelton (October 14, 2007), and brother-in-law John Soriat (husband of Elizabeth Soriat), who also passed away on January 17th, seven years prior.

Garry was a RCMP member stationed in Nelson in the early 1960’s. He changed careers and began working at Columbia Beverages through the mid-1990’s, until retirement. He filled his spare time with the love of his life Helene, and hobbies that included flying, skiing, boating, hiking, fishing, and travelling. We all know that Garry’s most loved hobby was flying, and all that it encompassed both in the air and on the ground. His flying buddies will attest to that! His dedication as an early member of Nelson Pilot Association (NPA), extensive hours of volunteer work, and serving as NPA President for fourteen years
showed his love and commitment to the NPA. His many flying buddies will dearly miss his camaraderie, engaging anecdotes, great sense of humor, and easy smile.

His other flying activities included many Remembrance Day formation flypasts over the Nelson Cenotaph, CASARA search and rescue, and flyouts with his many pilot buddies in his beautiful Cessna 172. There were numerous day trips for lunches in Oliver, and Fairmount Hot Springs, weekend fly in fishing adventures to Beatrice and Scum Lake, his first time skydiving in Ely, Arizona when he was 70 years old, and several international trips crossing into the United States and Mexican airspaces.

In 2006, Garry, and dear friend Bill Randel, built a lovely cabin on Kootenay Lake at Gray Creek where grandchildren, family and friends will continue to spend their summers. Garry would take anyone who was interested for a plane ride, as it was parked at Crawford Bay Airstrip, visible from the cabin’s deck. Many close friendships were made sitting at lakeside campfires, enriched by Garry’s wonderful and kind personality. He will be greatly missed, and for those that time spent with him, his memory is cherished.

While Garry was born in Briar Crest, SK, Nelson was home to Garry and Helene for over forty years. They recently moved to West Kelowna, and they have been delightedly welcomed by the warm retirement community
known as Sonoma Pines, where they have met many wonderful people.

To honour Garry’s request no service will be held. In lieu of flowers, please consider making a donation to the charity of your choice in Garry’s memory.