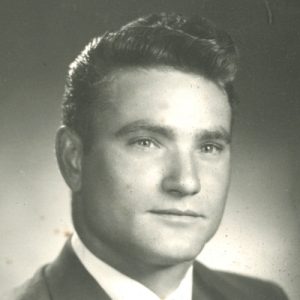 Aldo was born in Goriska Brda, Slovenija on October 28, 1934. There he met his future wife of 57 years, Ermelinda “Linda”, and after his 2-year military service he emigrated to start a new life in Canada (Calgary) in 1959. Linda followed in January 1961 and they were married in March 1961. First born Robert arrived, in April 1962, followed by his brother Eddy, in May 1964.

Aldo worked the farm-life throughout his lifetime, starting back home helping his father raise his 6 siblings, in 1959 he then immigrated to Calgary, Alberta and worked for the Murray’s Farm in Springbank, in 1985, moved to Kelowna BC and was hired on with his wife Linda by Quail’s Gate Estate Vineyards until retirement.

It was the life in the city that meant a move from the farm. Aldo found work in hardwood flooring working with his life-long buddy, Bruno, and turned it into a career with Terakita Flooring installing oak floors for the well-respected home builder, Keith Homes in Calgary, AB. He then became a Journeyman Carpenter in the union for another 15 years and worked on a number of downtown skyrises in Calgary, AB.

Aldo and Linda met and kept their lifelong friends: Mario Ladic (Sandy), Vincent Stepancic (Lidija), Marcello Hrvatin (Slava), Rudy Kress (Stefani), in close company throughout their times in Calgary, AB. Moving away from their beloved friends and many acquaintances in 1985 to Kelowna, BC was akin to moving away from their homeland.

Aldo and Linda proceeded to build their final home in beautiful British Columbia and re-unite with lifelong friends Bruno and Aurelia Svetina and the patriarch family the Cipot’s, Louis and Paula. They proceeded to make a new life by making new friends and enjoyed the company of the Kelowna Slovenian Canadian club as they had done in the Slovenian Canadian Club in Calgary. Carrying on the tradition of Briccola, the card game, or Bocce ball lawn bowling throughout their lives.

Attending a dance with a visit from Old Country with an ensemble of Polka music’s finest sounds, was a highlight in their lives. It was always followed by an entourage including traditional dancers in traditional dress and the travelling pastor.

Funeral services will be held on Thursday, July 30, 2020, at 11:30 am at Immaculate Conception Church, 839 Sutherland Ave, Kelowna BC. Burial to follow at 1:00 pm at the Kelowna Memorial Park Cemetary.

The family thanks Kelowna’s first responders for their gallant effort and professionalism.

Memorial donations may be made to the Canadian Mental Health Association, cmha.ca, and or the Canadian Cancer Society, www.cancer.ca.


The service for SKOCAJ, Aldo is scheduled for Thursday, July 30, 2020, at 11:30 am. Below you will find the map for the service location and the contact information should you have any questions.