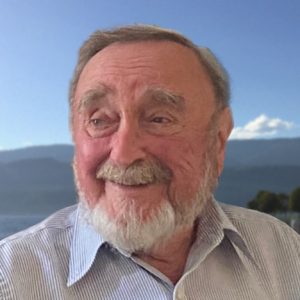 On Friday, August 14, 2020, Richard  Gerald Spear passed away peacefully with family by his side.

Richard (known as Dick to his family) was born ‪91 years ago in St‬ Mary’s Hospital, London, England. Later his family moved to Dover where he spent many happy years with his life-long friend Terry Sutton, scrambling around the cliffs and through the castle grounds. After being evacuated during the war to Wales he returned once again to Dover and continued school living with his beloved Auntie Mabel as both his parents had passed away. After graduation, he joined the army and served as in the 8th Armoured Division as a communications and tank driving instructor. He later went to the Palestine police for a tour of overseas duty. Returning to England he joined the Customs service, working the Irish land border, patrol boats and Heathrow Airport where he met Jean Hamshere, his first wife, and mother of his three children.

While stationed out of Southampton their son Philip was born. Four years later, Jean and Dick seeking more adventure immigrated to Vancouver BC, where daughters Joanne and Jill were born.

Dick was employed in marketing with companies such as Proctor and Gamble and Helena Rubinstein and ended his career volunteering, along  with his second wife Jeanne, with International Executive Services Corps in Egypt, Jordan, Columbia, Dominican Republic, Lesotho and Turkey. Dick and Jeanne eventually retired some years ago in Peachland and then Kelowna, BC.

Four years ago, Dick was delighted to be contacted by his long-lost sister Beverly Wheaton of Bristol, she and her husband Tony came to visit Dick, and he was able to enjoy a few short years learning about her life and family.

Predeceased by his wife Jeanne and his brother Philip, Dick will join his wife Jeanne who passed in March of this year.  Survived by his sister Beverly; children Philip, Joanne, and Jill, and stepsons Jean-Paul and Pierre; grandchildren, Sarah, Alexander, Sydney, Hilary, Erica, Lawrence, Julian, Michele, and Jon; and great-grandchild Alexandre.

At his request, there will be no formal service. If you wish to send a condolence, post photos or share a memory please scroll down the page to the area called “Condolences”.