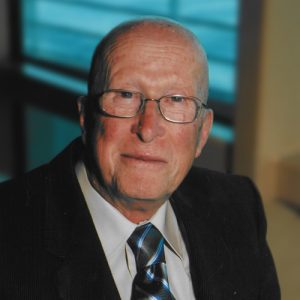 Arthur “George” Spencer joined his Lord in heaven on January 2, 2021. The only child of George Leonard and Rose Ellen Spencer, George was born and raised in Revelstoke, BC. It was in Revelstoke where he met and married the love of his life Elsie Dakers. He was predeceased by Elsie in 2001 and his beloved daughter Kathleen in 1993. Left to treasure his memory is his son John (Glenda); daughter Eleanor (Terry); son-in-law Bruce; grandchildren Tanya (Albert), Rob (Sherry), Alison (Tom), Brady (Naomi), Christopher (Nina), Andrea (Jas), and Mark; as well as 12 great-grandchildren; and his many friends.

Growing up in Revelstoke he developed a love and respect for the outdoors, wildlife, and mountains. He had a 41-year career with CPRail, where he began as a baggage man in 1944 and retired as the Customer Service Center Supervisor in 1985. He retired to Kelowna, BC where he enjoyed golf (into his 90’s), wood working (in particular, making grandfather clocks for all his grandchildren), painting, stamp collecting, and cribbage. He was a life member and Pilgrim of the Moose Lodge and an active member of his church.

George will be remembered as a man of integrity, fairness, good humour and a strong faith.

A family celebration will be held at a later date when it is safe to do so. Rest in Peace Dear Dad, Rest in Peace.