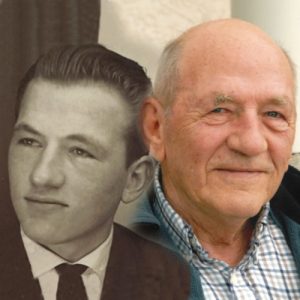 Alfred was born in Korschen, Kreis Rastenburg, Ostpreussen. He was the youngest child of Maria and Paul Steppuhn and had four siblings: Irmgard, Siegfried, Bruno and Hans. He studied to become a Brick Layer and decided to immigrate to Canada at the age of 19 in 1958. He met and fell in love with Annie Dihanits at a dance in Vernon. They were later married on November 19, 1960. Alfred and Annie had three children (Angela, Jacqueline, and Mathias) and raised them on the farm, initially on Hollywood Road then in East Kelowna. He was a father-in-law to Frank, Melanie, and Dave. Grandpa to Frank Jr (Natsuko), Adam, Maxwell and Milan.

Dad loved farming and learned a lot from his father-in-law Mathias Dihanits. Farming became his life’s passion. His schooling and talent in bricklaying also gave him many jobs in Kelowna’s construction industry. With the support of the East Kelowna community, Dad became a British Columbia Fruit Growers association delegate for the South East Kelowna area. This gave him a platform to voice his concerns for the plight of the farmers who continue to struggle to make a living. He also was a Knights of Columbus member and admired the organization for their efforts within the community. His number one hobby was a German card game called Skat. This strategic game which has some similarity to Bridge is played all over the world. It was with Skat that Dad traveled to many destinations with Mom to play in tournaments. The most memorable being his first place win for the day at a world Skat tournament in Torremolinos, Spain.

Dad loved to visit, and receive visits from, family and friends in Canada, Europe, United States, Mexico, and Guatemala. Even with thousands of kilometres between and a time difference, it was important to him to keep in touch. Dad was funny, kind, compassionate, loving, generous, and a hard worker. Where-ever he went he made friends and welcomed them all to their home. Dad loved his family, friends and appreciated them so much. His love was reflected by his generosity of himself to others and his community. No matter how dark the current day was he was optimistic and gave light to the days ahead with his friendship, humor and work. Dad’s and Mom’s door was always open with coffee, cake, food and drink at the ready. He lived a rich and full life. Dad we all miss you and love you dearly. We are comforted knowing that one day we will see you again in heaven. The Family wants to thank Dr. Parson’s, the staff at Kelowna General Hospital, and at Chatsworth Retirement community for giving Dad such good care.