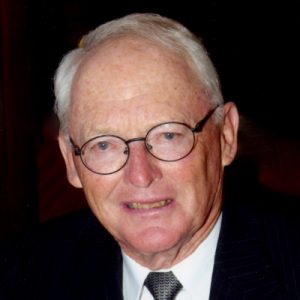 Dick Stewart, long time Kelowna businessman, received an invitation to an extraordinary long-term meeting today, which he has accepted with his usual grace and candor. Vacating his office here with us, he will be joining many old friends and family, who we understand await his arrival with a toast and a glass of Quails’ Gate Pinot Noir.

Born at Kelowna General Hospital on April 8, 1926, Dick was one of four children raised by Richard (Dick) and Mary (Whitworth) Stewart.

He grew up in a household which welcomed many into their midst including several of his father’s brothers, who left Ireland and lived with the family on the corner of Richter and Harvey Avenue, introducing the children to Irish blarney and a bit of colourful Gaelic. In later years, the family adopted cousin Bob Springer’s wife, Di and baby daughter, who came to live with them while Bob was overseas in the war. These early seeds of generosity and support were values Dick upheld his entire life.

Early on, Dick was introduced to the value of teamwork and strategic planning as a member of The Harvey Avenue Gang – a group of downtown Kelowna boys who entertained themselves by building rafts, swimming and biking through their childhood years.

A music lover, he sang in the Boys Choir at St. Michael’s and All Angels Church, performed in “Oklahoma” and taught his children to sing as he played the piano.

Dick also loved to pen and recite rhymes. As a member of the Kelowna High School Student Council, he initiated the ‘Clean Up Campaign’, and convinced his classmates to adopt his slogan “Lift Your Litter, Keep the School Fitter”.

He was a dedicated scholar, graduating from KHS with the Major, Minor and Academic Awards. Upon graduation, he enlisted in the Armed Forces, but the war soon ended and he was discharged. Ready for another adventure, he headed off to UBC in his father’s Hudson with brother Jim and dear friend, Dave Leckie, graduating with a double major in Agriculture and Commerce.

Dick returned home to work in his father’s business, Stewart Brothers Nursery, for the next ten years. At the time, the nursery was still using horses and plows to plant their tree Brothers stock. Although he fondly recalled helping to clear pine trees off the property with sticks of TNT, Dick had some more contemporary ideas he wanted to pursue.

The nursery often shipped trees through Chapman’s Trucking and there was a pretty, auburn haired girl who worked there. Nearly ten years her senior, Dick worked hard to convince Dave Chapman to introduce him to Rosemary Boswell. Eventually, he captured her heart and hand and they married in 1956, raising four children together.

That same year, he travelled with his father to Penticton to successfully negotiate a deal with Halpen Moffat on the old Alison Ranch property on Boucherie Road in West Kelowna. With a keen interest in grape growing, he began to plant experimental grape varieties at the site which eventually opened as Quails’ Gate Estate Winery in 1989.

Dick was proud of his heritage, his community, his family and his business. He considered the staff at Quails’ Gate his extended family and loved to wander through the vineyards, offices, restaurant and wine shop visiting with them and chatting with customers. He was never afraid of new ideas and believed in putting his ‘nose to the grindstone and his shoulder to the wheel’.

He also believed ‘if you know who you are, you will know where you are going.’ An avid traveler, he proudly walked on the Great Wall of China for his 88th birthday, yet no matter how far he went, he always loved to come home.

He loved to water and snow ski, enjoyed tennis and especially golf with many friends. We understand a tee time at The Cloud Nine Golf Course has been arranged by his grandson Andrew, who is awaiting his arrival with his clubs polished and ready.

Dick loved his hometown and felt a deep responsibility to community service, building quite a roster in his lifetime:

He leaves behind his team who will miss their captain’s leadership but will uphold his values and continue caring for the community he loved: his wife, Rosemary; children, Ben, Cynthia (Scott) Walker, Andrea (Dave) McFadden, Tony (Lisa), 12 grandchildren, 8 great-grandchildren and numerous much-loved nieces and nephews. Predeceased by his parents Dick and Mary Stewart, brothers Bill and Jim, sister Kathleen and grandson Andrew.

During the past two years, Dick and his family had the pleasure of making many new and dear friends at The Village at Mill Creek, our heartfelt thanks to all of you for welcoming him into your midst.

Respecting the current social distancing guidelines, the family will have a private service. The service and tributes can be watched online, starting Friday, May 22nd at 2:00 PM, and if you wish to send a condolence, post photos or share a memory, please scroll down the page to the area called “Condolences”.

THIS SERVICE WILL BE LIVE STREAMED/BROADCAST ON FRIDAY MAY 22 AT 2:00PM