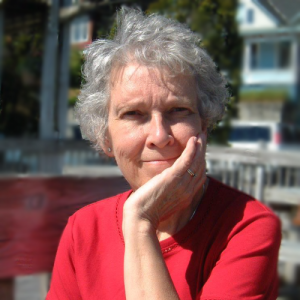 Deanna graduated from North Vancouver H.S. in 1957. She went on to study Nursing in Residence – Vancouver General Hospital and graduated as a Registered Nurse in 1961. In Montreal, Deanna resumed her nursing career and worked for seven years at the Lakeshore General Hospital – MONTREAL, retiring in 1997. She enjoyed baking, sewing, meeting people, and organizing and running bible study groups.

Deanna met Laird Stovel in 1959. They were married on September 2, 1961, in Vancouver, BC. Together they raised 3 children Susan (Ken), Gordon (Lucille), and Barbara (Rich); in Nanaimo, BC, and in Montreal, QC.

Deanna is survived by her Husband Laird; her three children; brother Edward (Ted) Olsen; and her grandchildren. She was preceded in death by her brother George Alexander (Sandy) Birch.

Laird:
Deanna was my faithful, loving, devoted wife for just over 60 years. She loved me dearly, our three kids, people, and Jesus. If you met her for the first time Deanna would much rather want to learn about you than tell you about herself. Just before our Susan was born Deanna gave up her nursing career and took on the high calling of stay-at-home Mom and homemaker. Deanna excelled in all aspects of this new responsibility. Deanna was a superb cook and took pride in baking from scratch. She made the best Nanaimo bars in the world and that is not just my opinion. Her absolute favorite activity outside of the home was to either lead or participate in a Women’s Bible Study. More than 60 years ago I promised to love, honor, cherish and protect Deanna through sickness and health until death would separate us. What a journey of great joy it was! Praise God.

Susan:
My wonderful Mom has stepped into Heaven…to imagine it makes me smile. There are not enough words to describe her. Mom loved us in sacrificial ways, and I know that she prayed for us daily, sometimes out loud.
Mom showed me in actions and words (spoken and written) how to encourage people. She shared many Bible verses with me.
One of my very favorite memories was when just she and I were together trying on wedding dresses for me in downtown Montreal. Mom encouraged me that I could sew it myself and she assisted! She has taught me so much.
I will see you again.
Thank you for all your love.

Gordon:
My Mom would never engage in small talk with me or waste words, she would look me in the eyes and say, “I know what you`re feeling” or “I`m proud of you” or else a direct “you shouldn’t do that” or “talk to me, tell me what’s troubling you”. I will always remember that beautiful direct, piercing, and engaging face as we talked. As kids, we received the best home medical care from her professional training, with often a calm reassuring, “there you go, you`re fine now”. Disease has taken her far too early from our lives, but I will always remember the love and special moments Mom shared with us.

Barbara:
Just as Saturday turned into Sunday, my precious Mom stepped into an eternity with Jesus. She was ready, and I think a little eager since she quickly spiraled down in only a few days. She spent her time here on earth serving, loving, and encouraging others. She was a master at knowing each person she encountered. The ideal greeter, even in years that her memory started to fog, she still exhibited these characteristics. She couldn’t help it. She oozed hospitality and love. I had a front-row seat, and I watched intently and took mental notes. I’d consider myself successful if I become half the godly woman she was. She selflessly loved us three kids, and my dad. Mom loved her Savior, worship music, and her many tattered, well-worn, underlined, highlighted copies of scripture. These simple words and limited paragraph could never encapsulate all she was to me, and to so many. Now, she’s free. And laughing. And dancing. And her mind is clear. She’s also more alive than she’s ever been. 1000% sure. See you soon, Mom. I love you. Save me a seat next to you. You’ll probably be assigned Assistant Head Greeter.

Rich (son-in-law):
A Long Goodbye. A Quick Exit. A Glorious Entry. And all three of these statements are at the same time true.
Deanna had been in an ever-encroaching cloud of darkness for the past 20 years from Alzheimer’s. Deanna who had been so attuned to the lives and hearts of others as a daughter, a sister, a nurse, a wife, a mother, a mother-in-law, a grandmother, and a friend to all she engaged, was robbed of her wit, of her awareness, and her grasp of the everyday people and activity around her. It slowly turned into a repetition of questions or statements that had just been asked or spoken, a searching for something that was still in the place where it always had been, and a wondering of where Deanna was, what she was doing, and who these “strangers” were around her that Deanna had loved and known her whole life. It was a long, drawn-out, painful, goodbye. Each visit was a measured loss from the previous one, a jarring reminder of the direction this was going, and of the inevitable, yet prolonged ending. I wrote about this in a blog a while ago, and if you want to catch a glimpse of her posture even in the midst of this long goodbye, you can read about that here: –hartsonmission.org/2017/06/27/in-the-dark/

A Quick Exit.
Deanna fell this past week, which had her taken to the hospital for tests and observation, but having no broken bones or detectable injury, was returned to her long-term care facility. But something changed, and what we thought might be days or weeks became hours, getting the text in the middle of the night that Deanna was gone.

A Glorious Entry.
If you read the glimpse into her steady trust in God throughout her life in the link above, then what happened this morning was a profound victory over the devastating effects of her Alzheimer’s. Romans 8 gives some glimpse into this, when it says “I consider that the sufferings of this present time are not worth comparing with the glory that is to be revealed to us . . . that the creation itself will be set free from its bondage to corruption and obtain the freedom of the glory of the children of God . . . and we know that for those who love God all things work together for good . . . and those whom He predestined he also called, and those whom He called he also justified, and those whom He justified He also glorified . . . For I am sure that neither death nor life, not angels nor rulers, nor things present nor things to come, nor powers, nor height nor depth, nor anything else in all creation, will be able to separate us from the love of God in Christ Jesus our Lord.”
Deanna loved God, and rested in His love for her, and His promises. And she had a glorious entry into the presence of the One who conquered death, and sin, and Who sets all things right. Her mind is clearer than ever. Deanna is more alive than ever.

A family celebration of life is to be scheduled at a future date.

In lieu of flowers, donations may be made to the Alzheimer’s Society of Canada, alzheimer.ca/en