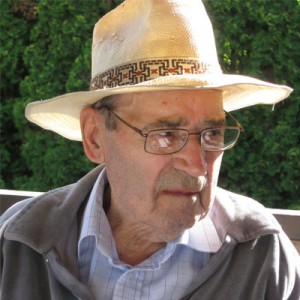 Ralph Elmo Strand, age 93, of Kelowna BC, passed away gently on December 23, 2011.  Ralph was born to the late Nils and Anna Strand, January 20, 1918 in the Alpine District of Manitoba, the third of six children.  He was predeceased by his wife Madeleine (Allard) in 1984, son Ralph in 1969, son David in 1974 and sons-in-law, Ron Sclater (1979) and Mikko Sibakow (2009).  He was also predeceased by his brothers Leonard, Arnold, Glen and sisters Irma and Irene.  He is survived by four daughters, Marlene Boback (Ernie) of Kelowna BC, Phyllis Willox (Bill) of Brandon MB, Bernice Sibakow of The Pas MB and Vera Clark of Kelowna BC.  Also surviving are nine grandchildren, Michael Boback (Corrine), Robert Boback (Tammy), Susan Stewart (Dave), Michelle Boback Toufexis (Elias), Angie Willox, Sarah Stewart, Bryan Willox, Mikael Sibakow (Brandy), Lindsay Sibakov, and seven great grandchildren, Makayla Boback, Ethan Boback, Bailey Sibakow, Samuel Stewart, Lincoln Boback, Madeleine Boback, and Isabella Toufexis.  Ralph could accomplish anything he set his mind to do.  He was a born mechanic and his love of the trade saw him participate in World War II as a mechanic overseas. Upon his return to Canada, he met and married Madeleine Allard on November 28, 1946, and together they built an automotive business in The Pas Manitoba, selling Studebaker cars, farm implements, auto body services, and gas and mechanical services until 1969.  He retired then but discovered he was easily bored and began a second journey in life to learn about woodworking and furniture building.  His love of only working with true hardwoods was appreciated by so many. His talent and precision in his craftsmanship was evident in the many homes he filled with his custom made furniture from Manitoba to BC.  Raising six children and operating a business took a lot of patience and humor and he certainly had an abundance of both.  His love of life and his family came first and foremost and was the foundation for many great memories.  He played the accordion and fiddle for several years in The Pas Rhythm Pals band, built a cottage at Clearwater Lake for the family, taught all of his children to “measure twice, cut once”, and was a great inspiration for his kindness, ethics and stalwartness.  Ralph was still building furniture at 85 years old, and it was the pure love of working that gave meaning to his life.  He was a Dad who led by example and will be so sadly missed.  A service will be held at 1 p.m. Friday, December 30, 2011 at Springfield Funeral Home Chapel, Kelowna BC.  To accommodate family and friends in The Pas, Manitoba, a service will take place Tuesday, January 3, 2012 at 1:00 pm at Hemauer Funeral Home.  Interment at Lakeside Cemetery, The Pas, Manitoba. In lieu of flowers, donations may be made to the Canadian Lung Association.  Condolences may be sent to the family by visiting www.springfieldfuneralhome.com, 250-860-7077.


The service for Strand, Ralph Elmo is scheduled for Friday, December 30th at 1:00 pm. Below you will find the map for the service location and the contact information should you have any questions.