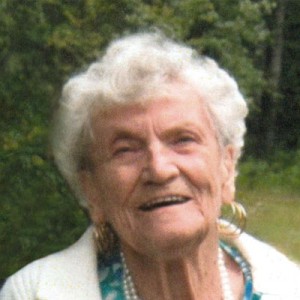 Gladys passed away at her apartment in Hawthorne Park, Kelowna, BC on June 1, 2011.  She was predeceased by her loving husband Ab, brothers George and Howard and parents Wes and Alma.  She was well loved by daughters Darlene Jennings, Judy McCrea, son Douglas Stregger and sons-in-law Steve and Bill.  She had eight grandchildren: Chris, Mikala, David, Elissa, Jennifer, Matthew, Laura and Ryan; six great grandchildren: Benjamin, Taylor, Liam, Owen, Faith and Lane.  Gladys was known by family and friends for her humor even during times of physical difficulty.  Her love of cards and her enjoyment of dancing in her earlier days were well known.  As the family can tell you, rarely could we beat her “crib hand.”  Most of all Gladys’ love for her family was undisputed: her passing will leave a large hole in the hearts of all!  There will be a time of visitation on Sunday, June 5th at 2:00 pm, with a celebration of her life to follow at 2:30 pm in the Springfield Funeral Home Family Centre, 2020 Springfield Road, Kelowna, BC.  In lieu of flowers, memorial donations may be made to the Multiple Sclerosis Society of Canada, Okanagan Chapter, 1855 Kirschner Road, Unit 230, Kelowna, BC, V1Y 4N7.


The service for Stregger, Gladys Alma is scheduled for Sunday, June 5, 2011 at 2:30 pm. Below you will find the map for the service location and the contact information should you have any questions.