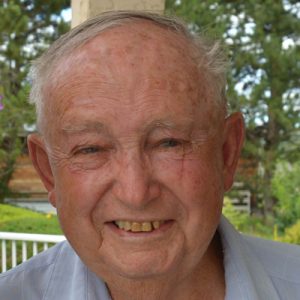 A Memorial Service will be held to honour Jim, due to the current pandemic restrictions it will be by invitation only, however the family would like to invite all who would like to pay their respects to join by livestream on Saturday, June 27, 2020 at 1:00 pm (see below).

It is with great sadness that we announce the passing of our loving husband, father and grandfather James “Jim” Henry Stuart who passed away peacefully on March 21, 2020 at the age of 85.

He will be remembered with love and gratitude by his wife, Anna, and their three children Heather (Tony), Sheila (Bruce), and Charles (Valerie); and their six grandchildren Christopher, Michael, Tyler, Ashley, Jaclyn and Megan.

Jim was born in Kelowna in 1934 and graduated from Rutland High School in 1953.  He bought an orchard in South-East Kelowna and over the years farmed a total of 40 acres.  He married Anna in 1955 and they raised their children on the orchard. During his years as an orchardist, he was active in various organizations of the fruit industry: B.C. Tree Fruits, Sun-Rype Products Ltd, and Fruit Growers Mutual Insurance.  He was honored for his application of new approaches to orcharding.

James was elected to the Kelowna Hospital Board in 1967 and this led to 31 years of commitment to public service. He served for 29 years on the Central Okanagan Regional District, both as a director and chairman.  He was elected to Kelowna City council in 1973 and was elected as Mayor in 1986. He served as Mayor for 10 years and retired in 1996.  Jim also served on the BC Transit Authority and was Chairman of the Municipal Finance Authority of British Columbia for 12 years.

Jim was an active member of St. Mary’s Anglican Church in East Kelowna and served as an Honorary Auditor.

During his career, Jim was passionate about the acquisition of park land.  Upon his retirement, Stuart Park was created along the waterfront in his honor, and he was made a Freeman of the City of Kelowna. He was known for his common-sense approach, and willingness to listen.

During his retirement, Jim enjoyed playing golf and participating in the lives of his grandchildren.

Although, Jim had health issues in the last few years, he never lost his sense of humor, or his calm and friendly manner.

A celebration of life will be planned for a future date.  In lieu of flowers, donations can be made to the Kelowna General Hospital Foundation, www.kghfoundation.com or the B.C. Cancer Agency – Sindi Ahluwalia Hawkins Centre for the Southern Interior, www.bccancer.bc.ca. If you wish to send a condolence, post photos or share a memory, please scroll down the page to the area called “Condolences”.