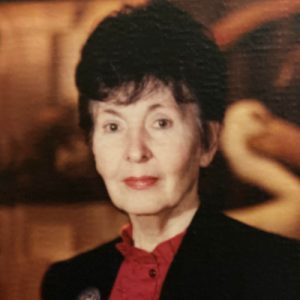 Our mother, Ursula Surtees, passed away peacefully on January 22, 2022, in Kelowna, BC.

Ursula was born in Surrey, UK and spent her early years surrounded by learning and finding her subsequent life steeped in new experiences that kept her time rich with discovery and curiosity.

She met her husband, John, in the UK when he was there on deployment with the Canadian Armed forces during World War II. The couple married and, while their daughter, Pat, was born overseas, they quickly made plans to move to Canada. As a result, Ursula became one of a unique group of women affectionately referred to as ‘War Brides’, who settled back with their spouses in a homeland filled with new and sometimes challenging experiences. It is here in British Columbia where son, Alan, and daughter, Frances, were born. Ursula and John would spend many happy hours looking for artifacts in her new homeland, and this soon found her involved in the museum.

Mom spent the bulk of her career in the museum field, where she spent her time building the profile of our own community Museum to be the largest Museum outside the Georgia Strait Urban Region. Work to this end included the addition of a second floor on the Museum building, restoration of the Laurel Packinghouse which housed the first provincial Wine Museum, integration of the Okanagan Military Museum, Chair of Kelowna’s Community Heritage Commission, and construction of an artifact conservation lab that now bears her name.

At the same time, Mom didn’t shy away from making an impact on the wider provincial and national museum stage. She served for years on the BC Museums Council, sat on national panels to champion local and regional museum/heritage programs and funding, and worked tirelessly with others on BC Museums council to establish meaningful funding to museums across the province.

For this long and thoughtful contribution to the wider field, she was given an Award of Merit from the Canadian Museums Association and a Golden Anniversary Service Award from the BC Museums Association. Her tireless work across these communities also brought her the Queen’s Jubilee Medal and the Citizen of the Year Award for Kelowna in 1983.

Perhaps one of Mom’s more enduring legacies is the work she did with Mary Thomas, an elder member of the Neskonlith Indian Band. That collaboration brought important and new First Nation curriculum-based education to classrooms across the region. These local school programs were adopted by many other school districts across the province. More than that, the First Nation language tapes she recorded with Mary and Mary’s mother, have been repatriated to the Secwepemc area where Mary originated, and copies now form part of the UBC library collection.

Mom was a woman driven by ambition, and most of that ambition was directed to making her community a better place – a place informed by a more thoughtful understanding of cultures and their tangible and intangible heritage.

In addition to her work in the museum field, Mom also published 10 books, 8 of which were non-fiction, and contributed many articles to local and regional publications. She was a fairly regular guest on the local radio station and co-produced 2 award-winning videos.

A personal passion for Mom was sewing, crewel work, and anything to do with fabrics and making costumes. Indeed, she helped created many costumes for the local theatre productions and provided many more for various occasions throughout the year to the people of Kelowna.

Ursula was predeceased by her dear husband, John. She is survived by her daughter, Pat (Russ); son Alan (Chris); and daughter Frances (Frank); and grandchildren Steven, Jennifer, Amanda, Victoria, and Douglas her sisters Frances and Brenda; great-grandchildren Lina, Lucy, Jamie, Mio, Christa, Anthony, Connor and Isla; and great-great-grandchildren Evelyne and Delaney. She is also survived by her sisters Frances and Brenda; and many nieces and nephews in England and Australia.

In lieu of flowers, please consider making a contribution to the Ursula Surtees Endowment Fund with the Central Okanagan Foundation at 306-1726 Dolphin Avenue, Kelowna BC V1Y 9R9 or at www.centralokanaganfoundation.org. Interest from this Fund helps support the Kelowna Museums Society’s work across the region.