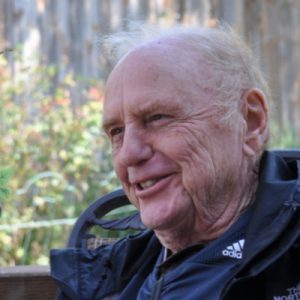 Ronald Everton Swail, age 87, passed away on March 14, 2020 with his family by his side.  He will be missed by his wife Wilma; daughters Dawn (Vern) and Diane (Mike); son Shawn (Heather); grandchildren Amanda, Brant (Melissa), Tori, Alex, Miranda, Dylan and Madison; great grandchildren William and Norah; as well as brothers Ralph (Audrey) and Wes (Eileen).  He was predeceased by his parents Wesley and Tory.

Ron was born on July 11, 1932 in Winnipeg, Manitoba.  His banking career brought him to Kelowna, BC a city which brought him great joy.  He was entrusted with the opening of the first Bank of British Columbia in Kelowna in 1970, prior to being promoted to the Vancouver head office.  After deciding to leave the bank in 1975, he followed his entrepreneurial spirit in launching Lincoln Leasing in 1976, collaborating to start the Kelowna Packers Junior hockey club in 1984, and partnering to build Shadow Ridge Golf Course in 1987.

Over the years, he was an active volunteer in Shriners, as well as minor hockey and baseball.  Ron was an avid golfer and longtime member of the Kelowna Golf and Country Club.  He loved his church and was a devoted family man and friend.

The family is very thankful to his care team, Dr. Carver, Dr. Finch, Dr. Carter and the Palliative Care nurses.  The Hospice House staff were a great comfort to Ron and his family in his final days.

A private family memorial will be held.   In lieu of flowers, donations made to the BC Cancer Foundation, bccancerfoundation.com or the Central Okanagan Hospice Association, hospicecoha.org would be appreciated.