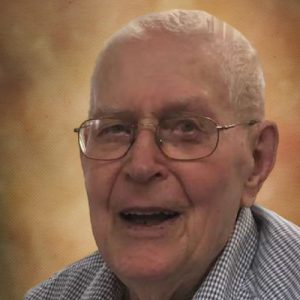 Peter was born on September 5, 1922, to William and Susana Thiessen in Hague, Saskatchewan, one of 7 children. His childhood was marred when his father was killed in a train accident when Peter was 8 years old. Severe financial difficulties caused Peter to take responsibility for his mother and younger siblings, as his older siblings were already out on their own. Peter learned early the value of frugality and being able to fix anything. Peter married Helen Harms in 1943 and the family lived in Swan Plain, SK, and Roblin, MB before moving to Winfield, BC. He first worked in construction, then as a welder. Eventually, the family moved to Vulcan, AB where Peter worked as a manager of a farm, something he always wanted to do.

He kept busy in retirement, spending hours in his workshop building furniture and especially carousels, for family and friends. Most of his children have at least one of his creations. Peter especially enjoyed road trips and Sunday drives, either with family or with good friends, Jake and Lena Hyde. Peter loved music, especially gospel songs, his favourite being “How Great Thou Art”. All the family would sing together while he played his guitar and sang. He had a deep love for Jesus, his Saviour, and his favourite Bible verse was John 3:16. Most Sundays would find the family at church.

In his later years, Peter’s health was failing and he needed to be in a Care Home. Recently, he thoroughly enjoyed celebrating his 99th birthday with his family around him. The isolation imposed by Covid was especially hard for him to bear as he dearly loved company. Now, we imagine he is enjoying singing praises to Jesus with all the throngs in Heaven.

An interment will be held on Wednesday, December 29, 2021, at 1:00 pm, at the Kelowna Memorial Park Cemetery. A celebration of life will take place in July, date to be determined.


The service for THIESSEN, Peter is scheduled for Wednesday, December 29, 2021, at 1:00 pm. Below you will find the map for the service location and the contact information should you have any questions.