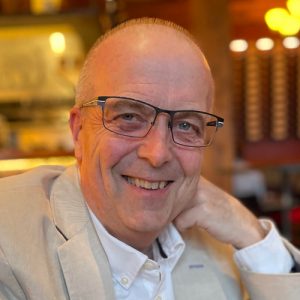 Scott Thomson passed away on April 15, 2022, at the age of 66, after a year–long battle with cancer.  He was born March 13, 1956, and was a long-time resident of Edmonton, Alberta before moving on to Kelowna, British Columbia.

Scott had many outdoor interests which included kayaking, cycling, skiing, and lawn bowling with the Kelowna Lawn Bowling Club.  He had a love for Astronomy and belonged to the Astronomical Society.  On the quieter side of Scott, he was an avid reader and enjoyed a good book or two.  You could always catch Scott preparing a delicious meal while enjoying a nice glass of wine.

Scott’s family and friends loved his cheeky sense of humour.  He was a kind and honourable man and known to be a man of integrity.  Scott is loved and will be missed.

Scott is survived by, Cynthia, his wife of 20 years; his stepchildren Desiree Van Spyker (Matt) and Chantelle Berezanski (Kyle); his granddaughter Madison Lynn Van Spyker; as well as his siblings Shirley Nicholson and Wendy Williams (David); and his numerous nieces and nephews and a large extended family. His parents, Fred (d. 1960) and Dorothy Thomson (d. 2004), and his brother Gordon Thomson (d. 2017) predeceased Scott.

With gratitude, the family of Scott Thomson would like to thank the Kelowna General Hospital (KGH) Trauma Unit and Stroke Ward, along with Dr. Andrew and the other KGH doctors; as well as Dr. Oyelese; and of course, the team at Kelowna Hospice House. All the care and compassion Scott received from each of you is greatly appreciated.

A Celebration of Life to honour Scott will be held at a later date.