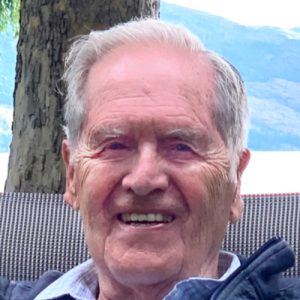 A Memorial Service will be hosted on Monday, July 18th, 2022 at 1:00 pm at Springfield Funeral Home, 2020 Springfield Road, Kelowna, BC. If you are unable to attend in person, please join the family online by Livestream at the time of the service (see below), a recording will be made available to view shortly thereafter.

Dr. Grahame Walter Karl Thorkelson was born December 28, 1929, in Winnipeg as the eldest of three children to Rose and Karl Thorkelson. He graduated from the University of Manitoba medical program in 1955.

He met his beautiful bride, Amy Dryden, a lab technician, in Winnipeg, and they married in 1955. He opened a general practice in Dawson Creek before moving the family to their beloved vacation city of Kelowna. He later specialized in anesthesiology and practiced at the Kelowna General Hospital for 28 years before retiring in 1998.

He was a skilled and respected anesthetist while at the Kelowna General Hospital. Grahame was also known as a handyman in the Operating Room, fixing equipment and tools and contriving things to make the work safer or easier for his colleagues. His love of puzzling out solutions and fixing things all around him resulted in his nickname “Puttering Pops”. He was an avid fish wrangler and loved boating. This love was, however, surpassed by his passion for music; always tapping his toes to the favourites of Glenn Miller, Pete Fountain, and more. He had amazing adventures with many; traveling, hiking, skiing, and paddling. He was an active member of the Gyro Club of Kelowna for decades. He hunted ducks and geese in Grand Prairie at “The Mallard Inn” for more than sixty years. He loved woodworking and has left a legacy of his creations for many to enjoy. He was a consummate and patient teacher of many things.

Grahame was the pillar of his family. His wife, Amy, passed away in 1998 as did his loving partner Doreen Gilmore in 2020. His son, Scott, sadly predeceased him in 1984, as did his sister, Shirley. He is survived by his son Cam (Barb) and Brent (Lenora) as well as grandchildren Kristilee (Blake) Jennifer (Adam), Grahame, Ben, and great-grandchildren, Lukas, Lauren, Sullivan, and baby Struthers. His brother, Brian (Heather), and many nephews and nieces will also dearly miss him.

Grahame passed away quietly at the age of 92 on June 24, 2022. In lieu of flowers, donations can be made in his honour to the Alzheimer’s Society.


The service for UPDATED SERVICE INFO – THORKELSON, Grahame Walter Karl is scheduled for Monday, July 18th, 2022 at 1:00 pm. Below you will find the map for the service location and the contact information should you have any questions.