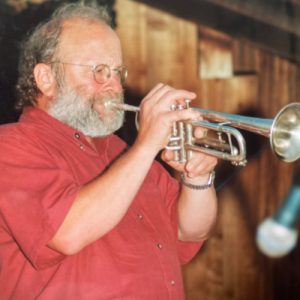 We are heartbroken to share the news of Brian’s passing from a sudden brain hemorrhage on Thursday May 26. We were at his side in Kelowna General Hospital as he passed peacefully. We take comfort in the fact that we were able to hold his hand, play him a bit of music, and tell him that we love him as he transitioned from breathing to stillness.

Brian is survived by his wife of 57 years, Patricia; daughters Laura (Andrew) and Karen (Craig); grandchildren Beatrice, Georgia, and Ella; brothers Ian (Joan), Neil (Georgina), and Glen (Donna); and nieces, nephews, and extended relatives in Canada, Australia, and everywhere in between.

Brian was born at St. Paul’s Hospital in Vancouver, B.C. on March 2, 1940. He was the second of four boys to Ella and Alan Todd. As a youngster he played soccer and enjoyed outdoor adventures, including what was to become a lifelong love of fly fishing. He took piano lessons (which he disliked!), but it was discovering the trumpet that truly set in motion his love and passion for music. He joined the Kitsilano Boys Band and in 1955 was the youngest boy in the band to travel to England and Europe on one of their famous tours.

Brian attended the University of British Columbia with plans to become a fisheries biologist. He spent many summers working with the provincial fisheries department to support his studies. But music beckoned, and Brian switched from science to UBC’s Department of Music where he completed a Bachelor of Music with a focus in education. In addition to music composition and theory, Brian studied cello as a secondary instrument to trumpet.

During his first teaching job in Salmo, B.C., Brian was smitten with Ymir’s new primary school teacher. Patricia Tunnicliff was an adventurous, beautiful Aussie woman who had come to Canada to teach and learn how to ski. Brian and Patricia were married in St. Ives Church, Sydney, Australia in 1965. After a year back in Salmo, they moved to Kelowna B.C, where they built a home, raised two daughters, and embarked on long teaching careers.

Brian taught music at Kelowna Secondary School  for 35 years. “Excellence requires dedication” was his motto, and that philosophy earned his jazz and stage bands numerous first places in provincial competitions, and a gold medal at the 1978 Canadian National Stage Band Festival in Winnipeg.

Not only did Brian teach music to generations of KSS students, but he was active in the local music community. He was involved in musical direction for community theater productions; played trumpet and arranged for jazz quintets and big band ensembles; and made appearances on a local TV program for children’s music education.

After retirement, Brian continued to play trumpet and piano, and he also embraced his other interests: travel adventures from the South Pacific to Tuktoyaktuk; puttering around his home and tending to the garden; cooking extraordinary gourmet meals for friends and family; camping, sailing, literature, and reading the dictionary; correcting his daughters’ grammar; and thoroughly enjoying his food, wine and art.

Brian was devoted to his family. His dedication to caring for Patricia during her cancer journey was unwavering. He took great delight in both teasing and teaching his three granddaughters about the vagaries of life. Grampy made special ice cream sundaes for the girls, composed songs for them, and introduced them to the beauty of a paradiddle. We miss him so very much.

“Music is life itself” – Louis Armstrong

In lieu of flowers, please consider a donation to your favourite music or education organization, or to the BC Cancer Agency, www.bccancer.bc.ca.

We would like to thank the first responders, and the doctors, nurses, and staff in ICU at Kelowna General Hospital for their care and compassion.

A private celebration of life will be held at a later date.

Send Condolences
Send Flowers, Sympathy Card or Comfort Meal
Please consider a donation to your favourite music or education organization, or to the BC Cancer Agency. Link: www.bccancer.bc.ca