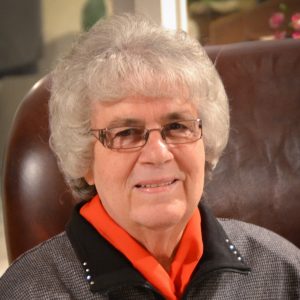 Thelma Tribiger has finished her race and gone on ahead to eternity.  She lived from December 20, 1939 to February 5, 2020, six hours and forty minutes shy of their 60th wedding anniversary with her beloved Willie.

The most important things in Thelma’s life were people and relationships.  She leaves behind her devoted husband, Willie; four children: Karen (Gary) Glanz, Kevin (Joanne) Tribiger, Sandra (Dennis) Mutschmann and Rodney (Elizabeth) Tribiger; as well as 26 cherished grandchildren: Nathan (Annelies), Amanda (Isaac), Amy (Josh), Mitchell (Nicole), William (Jean), Anna (Stephen), Andrew (Hannah), Zachary, Kurtis (Milena), Kimberly (Torsten), Paul, Simone (Braun), Martin (Kellodi), Nolan, Johanna, Brian, Chloe, Bethany, Tyler, Amalia, Megan, Justin, Elora, Lucy, Marcus, and Elena.  In the last years of her life, her great-grandchildren were some of the few people who could bring life to her eyes and a smile to her face: Jason, Austin, Jake, Stacy, Oskar and Adalynn.  Also left to mourn are her brothers Lenard (Marlene), Lloyd (Edith) and Alvin (Shirley) and, sisters Arlene (Abe), Elaine (Don) and Loretta (Gordon). She had a large extended family with many in-laws, nieces and nephews and a host of friends.  She loved well and treasured each one.  Thelma was predeceased by her parents, Gottlieb and Anna Tonn, sister Esther, brother Alfred, and her grand-daughter Staci Grace.

Thelma’s life was too rich and full to summarize in a few sentences.  Join us on Saturday, February 15, at 11:00 am as we honor the life she lived, the Lord she loved, and the legacy she left.  Her funeral will be held at Mission Springs Church of God, 3705 Mission Springs Drive, Kelowna, BC.  As her passion was for God’s Kingdom, donations to the Canadian Bible Society (biblesociety.ca) would be one way to honour her memory.  Alternately, as Alzheimer’s was her appointed gateway to eternity, a donation to the Alzheimer Society of BC (alzheimer.ca/en/bc) would honour the courage she showed in walking that path.


The service for TRIBIGER, Thelma Lillian (née Tonn) is scheduled for Saturday, February 15, at 11:00 am . Below you will find the map for the service location and the contact information should you have any questions.