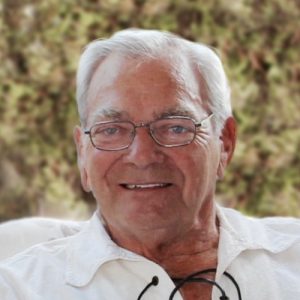 The family of Garth Barrie Turner sadly announce his passing on Saturday, May 8, 2021, at the age of 81. He left us peacefully while surrounded by family after a courageous and valiant fight with cancer.

He was born and raised in the New Westminster and Coquitlam areas of the lower mainland. He started his own family there with Diane in 1962. In the Spring of 1970, they decided to move to Kelowna from Port Moody with their two young boys, Darren and Daniel, and went to work creating a great life for them all here. Garth was working as an Electrician at that time, and work included the new Orchard Park Mall. Completing their original family unit, David, the third son of the couple, was born here in Kelowna in May 1972.

Garth was interested in sports, the outdoors, and all things mechanical from an early age. In his youth he was a great baseball player, often travelling throughout the Province to tournaments. After moving to the Okanagan, he switched to competitive Fastball and played well into his forties. He was an enthusiastic downhill skier into his seventies and played golf right up to the end of last season with both family and his wonderful group of friends at Michaelbrook and Mission Creek. After being introduced to the sport by his father-in-law, Garth was also an accomplished Trap and Skeet shooter, winning many competitions and championships dating back to the early 1960s and was in fact still active at the local COSSC club last Fall.

Hobbies and projects through his life generally involved the mechanical arts and included bicycles, go karts and sleighs in his early years and graduated to hot rods, classic cars and motorcycles at various points in his journey. He often mentioned that he pushed his BSA motorcycle home in the rain one night in his teens, (sold it promptly) and he did not dabble in that discipline again until a little later in life when his boys started riding minibikes. He wanted to join in the fun. He loved doing motor swaps in his garage, and high torque Oldsmobile engines found their way into everything from a ’51 Chevy to an International Travelall and various points between.

Through the years he was actively involved in several forms of auto racing including drag racing in his youth and later stock car racing he also enjoyed riding motorcycles and working on project cars of various sorts for decades. We all knew though that hunting and fishing were definitely his favorite activities for leisure time… and by a very wide margin. Annual game-bird hunting trips to Czar Alberta only stopped a few years ago, but the stories will live on for generations as will memories of countless fishing trips to so many of our beautiful mountain lakes.

Beyond those leisure activities that were of a sporting nature though, were the family and friend-based social activities where Dad truly was beyond compare. From the impromptu BBQ afternoons on Mom and Dad’s deck to the many, many evening hours spent at his beloved home-based bar sampling fine Scotch (etc) and verbally running through whatever scenario you needed to run through. He was magic as a host and an advisor. He also had a gift for entertaining in general, with Dad jokes and puns of all kinds a personal favorite that would see many of us still sitting at the table laughing hours after a holiday dinner had been cleared.

Garth’s professional life has been a source of pride for the entire family. After working as a mechanic post graduation, he became a journeyman electrician by his very early thirties. His solid “hands-on” experience proved to be an incredible asset when he moved into the sawmill industry, initially doing service and installation work. He later moved into sales of the equipment, and then ultimately going out on his own and becoming a highly respected consultant overseeing special sawmill projects relating to expansion and efficiency optimization. He became so widely known in North America as the “Chip N Saw Doc”, that reputation and demand took him (and sometimes Mom) all over the world including places like Australia, New Zealand, Tasmania and Ireland to name a few.

Along with the work-related trips, Garth and Diane also loved to travel just for the adventure. In the early years a drive to the Okanagan for a day or a weekend was common. When their boys arrived a few years later, many multi day road trips to Canadian and American destinations including places like Disneyland filled their lives with experiences and fond memories. Later and in more recent years, Dad and Mom travelled several times to Hawaii, Scotland, England and France and continued extensive domestic road trips.

Garth lost his own father early in life, and he had much to do in this world to make it turn out as well as it did. He worked hard and had to travel a lot through the years, but his dedication and resolve provided a great life as well as opportunities for those around him. There was a softening to his approach to life when his daughters-in-law joined the family one by one. By the time grandchildren and then great-grandchildren were on the scene, he was truly the gentle and wise patriarch that he was obviously meant to be. Family was the centre of his world.

His nieces and nephews were incredibly special to him as Jim and Donna arrived before his own children and Tamara, Midori and Aaron came after. A few years ago, Garth also became reacquainted with a son from a previous relationship. Bruce Howlett his wife Sherri and their children Kelsey, Michael and Kimberly have been connected ever since, making our clan even stronger.

Family had a larger meaning in his life as well. So very many truly close friends and extended family both here in Canada and in the UK. For many years, Norm and Wynnene Robinson and Paul and Laverla Pipke have been close local friends along with the entire Lyle and Doreen Jorde family and Cousin Bob and wife Bev Bull and so many others. Garth reconnected a few years ago with relatives in Saskatchewan and Alberta at a reunion. He had a special relationship with his cousins in Scotland, and he visited them there and hosted them here through the years. He so very much enjoyed spending time and creating lasting memories with them and their wonderful families. All these people along with several unofficially “adopted” sons that became so close to the family through sports, shooting, racing and through time itself continue to make us all feel as though we are part of a giant global family.

This entire family wishes to thank the many individuals that helped and befriended ‘Papa’ in his battle with Cancer, particularly the amazing staff at the Cancer Clinic including doctors, and nurses, and support staff alike. Thank you again from the bottom of our hearts. With the help of these people and along with her own superhuman efforts, Diane was able to keep Garth at home until just a few days before he passed. The love, respect and affection between them was a constant, and will be proudly carried on.

A gathering for a Celebration of Life is not possible at this time as we all know, but we look forward to getting together to share stories as soon as that is practical.

Garth accomplished and experienced a great deal in life. He cut a wide path and leaves a huge void in our lives, but he did a great job living a full life and set an incredible example right until the very end.

Thanks for everything. You will be missed more than can be put into words.

In lieu of flowers, donations may be made to BC Cancer or the KGH Foundation.