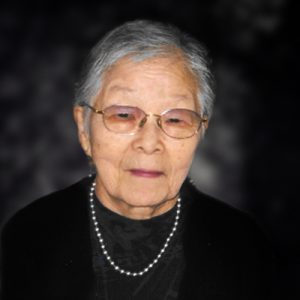 The family of Amy Ueda regret to announce her passing on February 17, 2021.

Amy was born in Kelowna, BC, the eldest child of Einosuke and Toshie Uyeyama. She was predeceased by her parents; brothers Eiji, Kanau and Takashi; and sister Mary Sachiko. Amy was also predeceased in 1985 by her husband Benichi. She is survived by her sisters Michiko and Joyce; and sisters-in-law Dorothy and Mary Elizabeth. She is further survived by her daughter Jenny (Masaki); son Tom (Carol); three grandchildren; six great-grandchildren; and several nieces and nephews.

About the age of 6, Amy and her two sisters were entrusted to the care of their grandparents in Japan. After completing her education, Amy returned to Kelowna to join her family. In 1943, Amy and Ben were married and lived in a small house on Guisachan Road. Five years later, with 2 small children, they moved to the corner of what is now Gordon and Sutherland Avenue; the service station there became “Benny’s” and the location became Amy’s home for 50 years.

Primarily, she was housewife and mother, but she also worked for Kelowna Nursery in the summers. Then from 1955-1968, she worked in the Guisachan Rd. pear orchard they had purchased. Later, she held seamstress positions at Henderson and Gem Cleaners.

For her 65th birthday, she was gifted painting classes at the Rec Centre. At first, she was hesitant because she didn’t think she could manage a new vocabulary but with encouragement from the teacher, she learned and later joined the painters group at the Seniors Centre. There, she made new friends and enjoyed a sense of achievement, especially when her paintings sold at the annual art show.

In her 70s, she moved to a townhouse in the Guisachan area, not far from where she had started married life. She was treated most kindly by her neighbors, especially Merle and Barrie. However, after 11 years of independence, daily living became difficult, and she moved to the Village at Mill Creek, where, for a time, she lived next door to Chiyo-chan who had been a decades-long friend. Amy remained at Mill Creek until her passing.

The family wishes to thank Dr. Griswold for Amy’s care over many years and to Dr. Joshua for providing care during the past few years. Heartfelt thanks to the staff at Mill Creek for their kind support of both Amy and her family.

In remembrance, kindly consider a donation to the Kelowna Buddhist Temple building fund or to a charity of your choice. Because of the current pandemic, a formal service will not be held at this time. If you wish to send a condolence, post photos, or share a memory please scroll down the page to the area called “Condolences”.