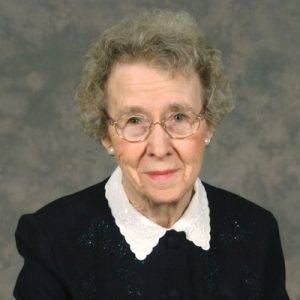 Our beloved Cathy Upton went home to be with her Lord at the amazing age of 105 years. She was predeceased by her first husband Victor Simpson, six weeks after their marriage in 1942, followed by George Upton, her husband of 22 years, in 1988. Also predeceased by her brother Donald and sisters Connie, Grace and Ruth. Mary, Cathy’s younger sister, passed only a few hours after Cathy. Cathy is survived by her brothers McGregor, David and Jim; and sister Lois; as well as many nephews and nieces.

Born in Nokomis, SK, Cathy moved with her family to Vernon, BC in 1927. As a young child she felt the call of God to be a missionary. This calling was fulfilled in 1944 when invited to serve with the Pentecostal Assemblies in Trinidad. When the West Indies School of Theology was established Cathy taught at the school for the next 20 years, also becoming the Dean of Women. In 1966, after returning to Canada, she married George Upton who was, at that time, director of Overseas Missions for the Pentecostal Assemblies of Canada.

After George left that position they moved to Vancouver where they both taught in Western Pentecostal Bible College. Cathy became the Director of Music and George taught Missions and Evangelism. In retirement they moved to Abbotsford and later Kelowna. Cathy and George’s love for young people led to the start of a young married couples class that positively impacted many couples over the years. Their involvement in several home Bible study groups, as well as counselling, brought them great fulfillment.

Following George’s passing, Cathy continued leading a ladies Bible study well into her 90’s. Through those years many women grew to deeply love her as a spiritual ‘mother’ and dear friend. Her final years were spent at Spring Valley Care Centre where she received wonderful care from many of the staff members.

We rejoice that Cathy is now enjoying her eternal home in the presence of Jesus.

In respect of the current events, a Celebration of Life will be held at a later date. In lieu of flowers, donations may be made to missions work through Evangel Church in Kelowna, www.evangelkelowna.com.