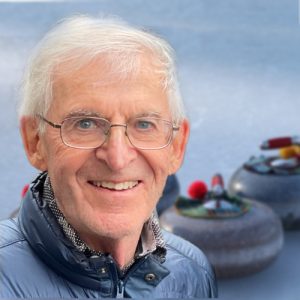 It comes with sadness to announce the passing of James “Jim” William Ursel.  After a battle with cancer, Jim passed away with his family at his side on September 29, 2021; he was born to Pauline and Rudy Ursel on January 22, 1937, in Winnipeg, MB.

Jim leaves to mourn Carol, his wife of 58 years; his son Robert “Bob” and daughter-in-law Leanne; Michael “Mike” and daughter-in-law Leslie; daughter Jill and son-in-law Geoff; a long with 9 grandchildren Mitchell (Nevada), Brayden, Spencer, Shea, Benjamin, Abbey, Jessica, Emily and Sean. He also leaves his sister Gloria and brother-in-law Harvey; sister-in-law Jackie; former daughters-in-law Lori and Kristen; and numerous nieces and nephews. He was predeceased by his father, mother, and his brother Bob.

Jim’s career with Air Canada started at the early age of 18, and he retired at the age of 52. The family spent 8 of those years in Montreal, QC.

Jim was extremely athletic. His sport of choice was curling and, he started at the age of 11 in Glenella, MB.  Jim’s impressive curling accomplishments included 1 Manitoba Junior Provincial title, 1 Manitoba Men’s Provincial title, 6 Quebec Men’s Provincial titles, winning the Brier in 1977, 2 Canadian Senior Men’s titles and 1 Canadian Master Men’s title. He has been inducted into the Manitoba Curling Hall of Fame, Manitoba Sports Hall of Fame, Quebec Curling Hall of Fame, and the Canadian Curling Hall of Fame. He was a member of the Governor General’s Curling Club and the recipient of the Ross Harstone Memorial Trophy for Most Sportsmanship.  He was the Canadian Curling Association Canadian Coach for 7 years, during which time he coached his sons Bob and Mike to a World Junior Championship and his daughter Jill to a Canadian Junior final. He was once asked by a reporter “what makes you so good?”, his reply was that it wasn’t him alone, that he was always surrounded by great people.

He retired to Kelowna in 1997, and soon after his children joined him in BC: Bob and Jill in Kelowna and Mike in Victoria. Jim remained active in his retirement finding fun in daily outdoor sports.  He became a downhill skier, a Pickleball natural, and an active golfer.

But above all, Jim was a loving family man who blessed us with a lifetime of great memories. Fun and family times at Lake Baron in Quebec and West Hawk Lake in Manitoba come to mind.  You would often see him and Carol walk the hills of Kelowna, arm and arm. He was a man comfortable with who he was, showed unconditional love and had a unique sense of humour.

The family would like to thank Dr. Jennifer Parsons, the care workers of Hospice House, and the many friends that were part of his life. His request would be for all of us to reach out to someone with an act of kindness. The family is requesting that no flowers be sent.

The family is extending an invitation to help them celebrate his life on Saturday, October 30, 2021, at 1:00 pm, at the Kelowna Curling Club, located on Recreation Avenue.


The service for URSEL, James “Jim” William is scheduled for Saturday, October 30, 2021, at 1:00 pm. Below you will find the map for the service location and the contact information should you have any questions.