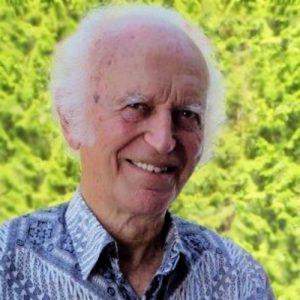 It is with deep sadness that the family of Peter van der Gulik announce his peaceful passing, at the age of 97, in the family home, and surrounded by his loved ones on November 13, 2022.

Peter leaves behind to mourn: his loving wife of 69 years, Tina; his eight children: Yuyun (Oscar), Ted (Karen), Vera (Claude), Rose (Richard), Lisa (Jeff), Connie (Charles d.2017), Della (Lane), and David; his 27 grandchildren; his 24 great-grandchildren; and many extended family members in Canada, The Netherlands, and elsewhere around the world.

Peter was born in Blokker, North Holland on June 25, 1925.  He was the oldest of nine siblings. At the end of the 2nd World War, Peter served 4 years for the Dutch army in Indonesia from 1945 to 1949. In November 1951 Peter met the love of his life, Tina. They were engaged in February 1952, just before he immigrated to Canada with his family in March. After a year of letter writing, Tina made the journey to Canada to join him, and they were married on April 6, 1953.  Peter and Tina worked hard and built their life together raising 7 children on their orchard.

Peter was a meticulous orchardist.  He took great pride in his orchard and in producing grade-A fruit. He and Tina were an excellent example of a strong work ethic and living a faith filled life. Peter was a true family man.  He valued being able to work on the family orchard and spending his work and leisure time with Tina and his children.  He enjoyed taking his children to the beach every day through the summer, reading, dancing, playing chess and cards.  He didn’t have a strong need for a big social life.  His social circle primarily consisted of spending time, when he could, with his siblings’ and their families.

Peter retired from the orchard in his mid-sixties, and he and Tina moved to their home on Okanagan Centre Road in 1992.  Peter spent his retirement years working in his yard, playing billiards, tinkering and fixing things, and enjoyed spending time with his grandchildren and great-grandchildren. In his last few years, he expressed his readiness to transition to the next life.  Often, when asked how he was doing, his response was “I’m still waiting”. His long wait is over, and he will be greatly missed.

In lieu of flowers, donations may be made to these charities, which were near and dear to Peter’s heart: Operation Smile, operationsmile.ca, the Canadian Cancer Society, cancer.ca, or the Heart and Stroke Foundation, www.heartandstroke.ca.

The Funeral Mass will take place at the church on FRIDAY, NOVEMBER 25, 2022, at 10:30 AM (PST). If you are unable to attend in person, please join the family online by Livestream at the time of the service (see below), a recording will be made available to view shortly thereafter.
A private family interment will take place on Saturday, November 26, 2022, at St. Theresa’s Cemetery.


The service for van der GULIK, Peter is scheduled for FRIDAY, NOVEMBER 25, 2022, at 10:30 AM (PST). Below you will find the map for the service location and the contact information should you have any questions.