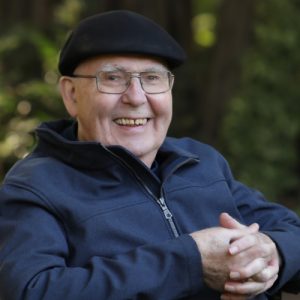 It is with profound sadness that Ken’s family said goodbye to him at Kelowna Hospice House on the evening of November 26, 2021. Ken is survived by Margaret, his loving wife of 61 years; his much loved daughters, Linda (Ron) and Christine (Jules); and cherished grandchildren, Aaron, Aimee and Ryder. He is also survived by sisters Margaret and Barbara (Guy) and brother Gord (Pat); brother-in-law Jim (Lucie) and sister-in-law Denise; and many nieces and nephews. Ken had many wonderful friends who have been kind and helpful during this difficult time.

Ken was born in New Westminster, BC and spent his childhood in the Coquitlam area. Margaret and Ken were married at White Rock, BC in 1960. They moved to the Okanagan with their two young daughters in 1966. Ken worked in the grocery business for 44 years. The first eight with Super Valu, followed by 36 years with Safeway before retiring at age 60.

Travel was a great source of pleasure for Ken and Margaret. Over the years, they explored Canada by R.V., train, bus, and car. They also enjoyed numerous cruises. Most recently, they delighted in a much-anticipated Rocky Mountaineer train trip to celebrate their 60th wedding anniversary.

Those who knew Ken will remember his positive outlook on life. He cherished spending time with Margaret, family, and friends. They will also know one of his favourite things was going to Tim Hortons for an afternoon coffee!

Ken was much loved and will be missed immensely.

To honour Ken, a Private Graveside Service will be held in Fort Langley, BC.

In lieu of flowers, donations may be made to the BC Cancer Agency Sindi Ahluwalia Hawkins Centre for the Southern Interior or the Kelowna Hospice House.