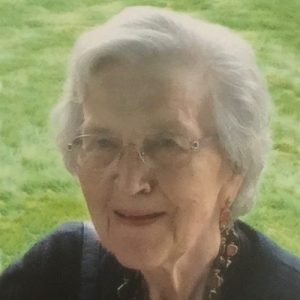 Mary passed away on October 1, 2020 at the age of 95 years. She is survived by her daughters Cheryl (Harry), Janet (Curt), and Margie (Mike); her 5 grandchildren Mandy (Pete), Tesssa (Dave), Nadya, Mike (Lauren), and Stephen (Paige); and her three great-grandchildren Taylor, Austin, and Mackenna. She is also survived by her sister Anne Holyk and sister-in-law Eunice Chornomud. Sadly she was predeceased by her husband of (almost) 70 years, John Wadleigh.

Mary was a hard-working, kind, and compassionate soul with a crazy sense of humour.  She was an efficient and proud homemaker all her life.  Born on the prairies in 1925, she helped on the farm until she turned 18.  She then joined the army and married an Air Force Pilot, John; she spent most of her life moving from base to base throughout Canada and Europe. She raised 3 daughters and finally retired to Kelowna, BC with John.

They became hobby-farmers and grew all of their fruit and vegetables. They eventually moved to Sun Rise Village, Kelowna Château, Salmon Arm Picadilly Terrace and finally Picadilly Care, where Mary passed away.

As square dancers, Mary and John danced together whenever and where they could; now they’re dancing up a storm together in heaven.

A Memorial Service will be held at a later date. If you wish to send a condolence, post photos, or share a memory please scroll down the page to the area called “Condolences”.