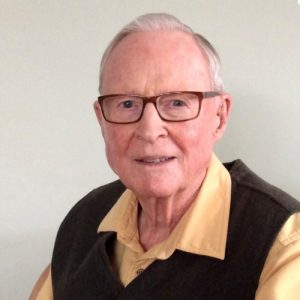 Archie was a fifth generation Canadian, whose ancestors emigrated in the early 1800s from Scotland. Born on December 16, 1927, he was raised on a farm in Belbeck near Moose Jaw, Saskatchewan with five siblings. He completed his secondary schooling in Moose Jaw. Archie served 2.5 years in the Royal Canadian Army Cadets, and was a Lieutenant on discharge.

In 1946, Archie moved to Calgary, AB, where he spent 2 years as an apprentice woodworker. He joined the Royal Insurance Company in 1948 and had a 40-year career in the Insurance industry. He met and married Doreen Wallace in Calgary in 1952 and moved to Edmonton, AB, where all four of their children were born. As Archie moved up the ranks at Royal, so ensued a number of career moves from Edmonton to Winnipeg to Saskatoon to Thunder Bay. In 1989, he and Doreen retired and settled in Kelowna, BC, a move that brought them much joy and many friendships.

Archie stepped up whenever his community needed leadership. For the United Church of Canada he served as President of the Alberta National Young People’s Union, Treasurer of the National Young People’s Union and was on the Board of Trustees for Ottewell United Church in Edmonton. He was the CFO for the local Progressive Conservative Riding Association in Thunder Bay and was appointed to a four-year term on the Lakehead University Board of Governors in 1985. He was an executive member with the Ft William Gyro Club and served several terms as president for the Sunrise Village Association in Kelowna.

Archie was a very organized, detailed person. He was always up-to- date on financial matters, and up to age 94 did his own taxes.  He knew what was happening with the TSX in his last days. He was deeply interested in his family genealogy, could beat most anyone at pool, loved to dance with Doreen, enjoyed card games, sports – both as a participant and watching them, and was proud of his garden, including his trees trimmed to utmost precision. As a father, Archie left a legacy of respect, responsibility to others, humility and a close-knit family, achieved in spite of his children living all over Canada. He will be dearly missed by his many friends and family.

A Memorial Service will be held to celebrate Archie’s life in Toronto on Thursday, July 21, 2022, at 1:00 pm, at Islington United Church, 25 Burnhamthorpe Road, Toronto, ON.

A second Memorial Service will be held on Friday, August 5, 2022, at 10:00 am, at the Springfield Funeral Home, 2020 Springfield Road, Kelowna, BC. If you are unable to attend in person, please join the family online by Livestream at the time of the service (see below), a recording will be made available to view shortly thereafter.

A private family internment at Kelowna Memorial Park Cemetery will follow, where he will be reunited with Doreen, his wife of 63 years.

In lieu of flowers, please consider a donation to the Kelowna General Hospital Foundation.


The service for WATSON, Archie is scheduled for Friday, August 5, 2022, at 10:00 am. Below you will find the map for the service location and the contact information should you have any questions.