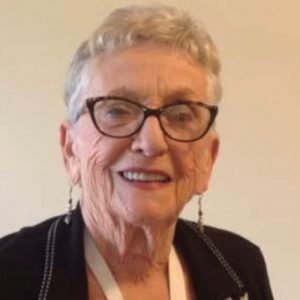 Grace was born in Regina, SK on June 5, 1934, to the late Doug & Betty Bennett. At a young age, Grace moved to Victoria, BC with her parents and sisters, Betty and Joy. Her sister Carol joined the family in Victoria. Grace grew up, enjoying the wonderful environment of the West Coast. She met George, and they married on April 24, 1956, and soon after their little family grew as Robin and Chris came along. George served 25 years in the Navy, and as a result, the family that started on the West Coast also experienced living on the East Coast as well. Grace loved her family and friends. In 1975, after George retired from the Navy, he and Grace moved to Abbotsford, BC. Here, George served as the Sheriff for the next 20 years. Throughout her working career, Grace worked at the Royal Jubilee Hospital, Victoria, BC, and the Chilliwack General  Hospital, Chilliwack, BC and then as a Document/Process Server for the British Columbia Court Services. To be closer to family, Grace and George moved to Kelowna, BC in 2010. In 2015, George passed away, and for a while Grace continued to live in Kelowna. She then moved to PEI to live on the ocean with her son Chris and daughter-in-law Sandra Watt. In April 2021 she moved back to Kelowna to reside at Northwoods. She enjoyed her time there, participating in their many activities and making new friends.

Grace was predeceased by her husband George in 2015, following 59 years of marriage; and by her parents Doug & Betty Bennett; her sisters Betty (Ed) Wittchen and Joy (Les) Lesuik; and brother-in-law Lee Berry; as well as her in-laws Charlie & Jean Watt; brother-in-law Arthur (Betty) Watt; and nephews Paul Berry, Brock Patterson, and Derek Lesuik.  She is survived by her daughter & son-in-law, Robin & Dan Moser; her son and daughter-in-law Chris & Sandra Watt; and her two granddaughters Brooke Moser & Blake Kam and Samantha & Clayton Brown; as well as by her sister Carol Berry; brother- and sister-in-law Ron & Eileen Watt; and more extend family.

The family would like to express their thanks to Doctor L. Arthurs; Doctor G. Jones; and the staff of Kelowna General Hospital Emergency and nurses Sarah & Angelo of unit 4B.

Memorial donations may be made to the Heart and Stroke Foundation of Canada, www.heartandstroke.ca.

If you are planning on attending, please rsvp at rmoser57@hotmail.com.


The service for WATT, Grace (née Bennett) is scheduled for FRIDAY, SEPTEMBER 9, 2022, from 2:00 to 4:00 PM. Below you will find the map for the service location and the contact information should you have any questions.