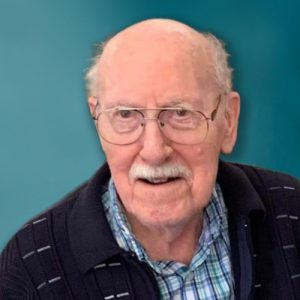 Roy Webb went peacefully into the presence of His Lord and Saviour, Jesus, on January 5, 2023, at the age of 97 years.  Roy was born in England on May 15, 1925.  When he was 2 years old, his mother and stepfather immigrated to Canada along with his older brother, Derek.  They lived for a time in Saskatchewan and then moved to Kelowna, BC.  After his mother was miraculously healed, the family came to Christ and attended Evangel in Kelowna.

Roy served in the armed forces during WWII.  Shortly after the war, he attended Bible College in Victoria, BC, where he met the love of his life, Lois Rathjen.  After graduation from Bible College, he moved to Campbell River to assist in the church there.  On May 5, 1950, Roy and Lois were united in marriage, and together they had three children: Keith, Kathy, and Laurel.

In 1952, they began pastoral ministry with the Pentecostal Assemblies of Canada.  Over the years he pastored in eight churches in British Columbia often as a bi-vocational pastor to support his young family including logging, mining, truck driving, and as an electrical contractor.

In 1990, Roy retired from fulltime ministry and in 1994 relocated to Armstrong, BC where he and Lois assisted their son, Keith, as Seniors’ Pastors.  In 2004, they moved to Kelowna and into Gordon Park Manor where he once again attended Evangel, coming full circle.  In April 2021, he became a resident at the Village of Mill Creek and lived there until his death.

Roy is predeceased by his brother, Derek; his sister, Sylvia; and his daughter, Kathy.  He is survived by his loving wife of 72 years, Lois; his son, Keith Webb (Debbie); his daughter, Laurel Brannon (Jon); his grandchildren, Cindy Larden and her two children, Daniel and Jacob; Randy Urbanowski (Christine) and their two children, Vivienne and Nicolas; Ronee Adams (Paul), and their three children, Katelyn, Jacob, and Andrew; Jeff Webb (Megan) and their three children, Liam, Sawyer, and Isla; and many nieces and nephews and extended family.

In lieu of flowers, the family requests that donations be made to the Pentecostal Assemblies of Canada Global Missions.

A Memorial Service will be held in the spring at Evangel Church in Kelowna (details will follow at a later date).