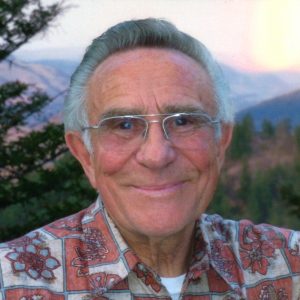 Helmut West Senior went home to be with the Lord on April 28, 2020, at the age of 84. He leaves behind Paula, his loving wife of 54 years; his daughter Doris Kools (Ron) and son Helmut West Jr. (Monica); his grandchildren Danielle Kools, and Mercedes, Kenidy, and Owen West; as well as his cousin Guenther Kamps of Germany.

Helmut was born on September 12, 1935 in Bayreuth, Germany to Fritz and Henriette Ochs. He grew up in the neighbouring village of Limmersdorf. Helmut’s mother passed away shortly after his birth and his father went to war, so Helmut was raised by his Aunt.

Helmut started his butcher/sausage-making career as an apprentice at the young age of 15. Five years later his first adventure took him south to Switzerland – Arburg/Biel.

In 1959 Helmut’s largest adventure began by moving to Canada. In Vancouver he started working at the Fletcher’s meat processing plant. After one year he decided to start his own business – Broadway Fancy Sausage. A couple years later he met and married Paula (who just happened to be his most favourite deli sales clerk at his shop).

After seven successful years Helmut, who always had a passion for farming, moved with Paula to the sunny Okanagan Valley and the village of Oyama in 1967.

Helmut and Paula kept very busy with their 20-acre orchard, while also starting a new sausage manufacturing facility – Okanagan Sausage. On Helmut’s “off” time he went big game hunting which he enjoyed throughout his life.

Two children came along in 1970 (Doris) and 1973 (Helmut Jr.). At that time Helmut sold the business and moved to their 70-acre Kalamalka Lake farm to start his love of ranching.

With his own beef cattle and feed lot he was able to operate a freezer meat business which, in 1979, led to the opening of a deli in Winfield (now Lake Country) called H&P Sausage.

Helmut and Paula had a booming customer demand to expand to Vernon which is where they created their next business. Making many friends and colleagues along the way, they finally
retired after 45 years! They enjoyed some travel and hunting, but most of all “hobby farming” with a few cattle grazing to keep Helmut smiling.

In 2001 Helmut was excited to help his son Helmut Jr. with the creation of Helmut’s Sausage Kitchen. Helmut Sr. was always proud of his son to carry on the West legacy!

Helmut and Paula always were a team in every step of the way throughout their work life and their faith. Helmut was determined for success but always looked to the Lord for guidance and
strength. Over the past several months he could bear his rapidly progressing dementia no longer, neither wishing to burden his loved ones. His suffering is over, and he is at peace in the arms of his Creator.