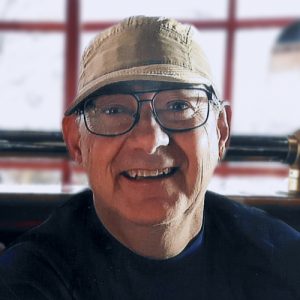 It is with immense love and sadness that the family of Robert “Rob” Wickenheiser announce his sudden passing. He went to be with the Lord on February 18, 2021 at the age of 58. Robert was born, raised, and lived in Kelowna, BC.

Robert will be deeply missed by his wife Lenora and his extended family: brothers Ed (Patty), John, Doug (Donna), Arthur (Angel); sisters Cindy and Diane (Darry); mother-in-law Myrna; father-in-law Joe; brothers-in-law Kelly and Nolan (Pat); as well as numerous nieces, nephews and many friends. He was predeceased by his daughter Emily, parents Peter and Elsie, and brothers George and Peter.

Robert was a kind, compassionate, generous person; always giving of his time and never missed an opportunity to help someone. He was dedicated to his family and was a well respected, active member of his church and community.

Robert grew up in the middle of a family of 9 with 5 older brothers, one younger brother, and 2 younger sisters. He is remembered as being a joker, always getting into mischief, and making his family laugh at his antics or misguided adventures.

Robert met his wife Lenora in 1983 at a Kelowna Regatta. They were married in 1984 and together raised a lovely and amazing daughter, Emily. For Robert, God and family came first above all else. Rob could always be counted on to be there; never hesitating if you needed him. He provided for his family as a safe, reliable delivery driver for several businesses in the Okanagan.

Over the years, Robert enjoyed many outdoor activities including: cycling, teaching archery, hunting, fishing, snowshoeing, gardening, and vacationing. He was active in his church; he assisted with Sunday services and other church activities and maintained his spiritual connections through his weekly men’s group meetings. He always seemed to be volunteering his time whether to help someone fix a vehicle, offering rides, teaching a skill, or helping friends and others to move homes. He was very social and can be described as one of a few people who could strike up a conversation with anyone and chat at great length.

For all of their care and compassion during a very difficult time, Robert’s family would like to thank the amazing care teams who attended him, including: the paramedics, ER staff, ICU staff, and BC Transplant team.

A Celebration of Life will be held in Robert’s honour on Saturday, August 21, 2021 at 11:00am PST at the Kelowna Christian Center.

If you wish to donate money in Robert’s name, please consider the ICU units at Kelowna General Hospital or the Heart and Stroke Foundation.


The service for WICKENHEISER, Robert “Rob” UPDATED SERVICE INFO is scheduled for Saturday, August 21, 2021. Below you will find the map for the service location and the contact information should you have any questions.