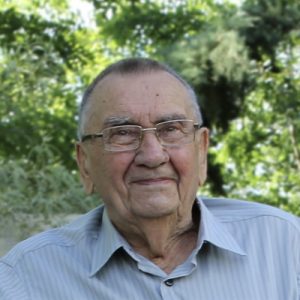 Jacob Roy Wiebe, son of Peter and Anna (Janzen) Wiebe, passed away peacefully Christmas morning December 25, 2020, at the age of 91 in Kelowna, B.C.  Jake was born in Adelsheim, Saporoschje, Ukraine, a farming village on January 21, 1929.  The third child of seven, Jake was a hard-working, obedient child who loved to learn but needed to be the financial provider at the early age of eight when his father was ripped away from his family.  Hard work and much strife was no stranger to Jake in his younger years.  The family travelled by horse and wagon from Ukraine to Germany during the war years and then by ship to Canada in August of 1948 at the age of 19. He worked in Winfield at various orchards then at the sawmill to support the family.  Jake met his loving wife Marian at the end of a church gathering when he noticed this beautiful girl standing all alone. He asked her if he could drive her home and history was made.  A short courtship began and on May 22, 1955, they were married in Kelowna at the MB Church.  Jake, with Marian continually by his side, continued to work at the Plywood Plant while building numerous houses, owning an orchard for a short time and raising four children.  Hard work and strong faith were embedded into Jake as hardships in his past moved him to succeed.  Jake took the time to holiday with family in Disneyland and road trip across the USA and Canada.

At the age of 60, Jake retired from the Plywood Plant, but in retirement continued to build houses, built relationships with family, spending time with his grandchildren babysitting, teaching them and treating them to hamburgers and fries once in a while. He loved his family and his family loved him.  We would like to thank the staff at Village at Mill Creek and Dr. Adrian Morris who helped him and cared for him in his last year of life.  Jake left a huge legacy behind and will be greatly missed.

Jake’s favourite Bible verse:
John 20:29  Then Jesus told him, “because you have seen me, you have believed; blessed are those who have not seen and yet have believed.”