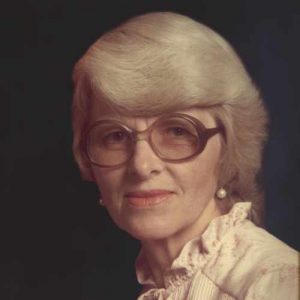 Helene Friesen was born August 27, 1926, and raised in the small rural community of Rabbit Lake in northern Saskatchewan. Later she attended boarding school at the Rostern Junior College where she made lasting friends. In 1950 she graduated from the St Paul’s Hospital School of Nursing. She moved to Winnipeg to live with her mother and sister Peg.

She worked nights at the Health Science Center in the neonatal unit moving to Grace Hospital to teach nursing in 1964. She continued training young girls to become professional nurses as she joined the team at Red River Community College in 1975.

Helene continued in her education perusals taking summer school until she graduated with her Masters of Education in 1980 and her Certificate in Adult Education in 1983.

In 1986 Helene accepted a 2-year government position to develop a College of Nursing in Brunei, Borneo. After those 2 years, she accepted a position in The Pas, Manitoba before going back to Brunei for another 8 years.

When the contract was up they decided to move to Kelowna. At one point Helene was on the First Mennonite Church board, the Gospel Mission board, volunteering at the Cancer Centre, along with Larry volunteering at the MCC thrift store and singing in the choir.

Through COVID she continued to volunteer at MCC twice a week. She loved talking to people and helping them find what they are looking for.

On July 5, 2021, Helene went to be with the Lord surrounded by family in her home. She was predeceased by her sister Neta, son-in-law Don and husband Larry.

She will be missed by many. If you would like to join us, we are painting our toenails red in remembrance of Helene.

A Funeral Service will be held to honour Helen on FRIDAY, JULY 16, 2021, AT 10:00 AM at Springfield Funeral Home with Randy Benson officiating, interment to follow at Kelowna Memorial Park Cemetery. Due to limited seating the number of attendees will be limited, if you wish to attend please click here to sign up.
The family would like to invite all who want to pay their respects to join by Livestream on FRIDAY, JULY 16, 2021, AT 10:00 AM. A recording will be made available to view shortly thereafter.

In lieu of flowers, donations may be made to MCC (Mennonite Central Committee – Canada), 134 Plaza Dr. Winnipeg, MB R3T 5K9 or BC Cancer Agency – Sindi Ahluwalia Hawkins Centre for the Southern Interior.