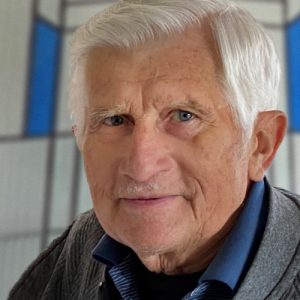 Jake went to be with the Lord, surrounded by his loving wife of 60 years, Helen; his daughter Jeanine & her husband Alan; and his daughter Audrey on May 8, 2022, at the age of 84. After a combination of cancer and more recent health issues, Jake spent the last 3 weeks in Kelowna General Hospital, but his body was no longer able to keep up the fight. He was ready to go “home”.

Jake was a humble and practical man who didn’t like a lot of attention.  He lived out his faith in God by making people and relationships a priority. Jake came from a war torn country as an orphaned child, immigrated to Canada, and put himself through university to become a teacher. He married Helen in 1961 and had two daughters. For most of his career he was a grade 7 teacher in Prince George, where he was loved by his students and colleagues.  He was very involved at Westwood MB Church, where he had spent many hours volunteering as boys club leader and usher.  He loved almost every sport, whether it be armchair or participating.  He was gentle, kind, compassionate and lived his life with integrity. Jake and Helen retired to Kelowna in 1997 and enjoyed many years as grandparents. Jake spent years greeting at Willow Park MB Church, and his warm, hearty handshake and greeting will be missed by many. If you had a chance to run into Jake, he could make your day just that much brighter.

In lieu of flowers, donations may be made to MCC (Mennonite Central Committee) or The Gospel Mission in Kelowna.


The service for WIENS, Jacob “Jake” is scheduled for FRIDAY, MAY 20, 2022, at 11:30 AM. Below you will find the map for the service location and the contact information should you have any questions.