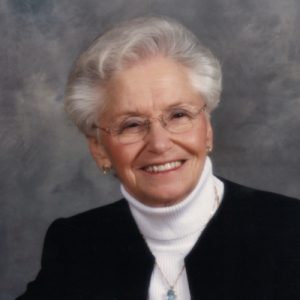 Having lived a long and happy life Rose Windjack passed away peacefully Friday, April 23rd, 2021 at the age of 90 in Kelowna, British Columbia.

Also left to mourn her passing are her brothers Johnny and Morris (Gladys), sister Jeannette (Doug), sister-in-laws Iris and Gloria and her many nieces and nephews and their children.

Rose was born on June 18, 1930, in Insinger, Saskatchewan. One of 7 children, Rose grew up on her parent’s farm near Birmingham, Saskatchewan. Upon completing high school, Rose worked at Theodore General Hospital as a medical assistant. This is where she met the love of her life and lifelong partner, Ted, at a local country dance in the spring of 1951. They were married on October 7, 1951, at Melville Ukrainian Orthodox Church. In 1956 they moved to Winnipeg, Manitoba where Ted taught high school and Rose began a 36-year career at MTS as an operator, instructor, supervisor and manager. Ted and Rose built their dream home in East St. Paul, Manitoba where Rose loved to cook, entertain, and spend hours in her expansive garden. In the early 1990s, Rose and Ted decided to make their retirement dreams come true and moved to West Kelowna where they filled their days spending time with their many friends and family, playing cards, camping, travelling and living life to the fullest. In 2015 Rose moved across the street to Westwood Retirement Resort.

Rose’s passion was to entertain family and friends. Rose and Ted travelled extensively and enjoyed many beautiful adventures together.

Rose made friends everywhere she went and was loved by all who met her, she was known for her infectious smile and kind and compassionate spirit. She loved watching her grandchildren grow and excel in their different pursuits and was always sharing how proud she was of her family. She will be fondly remembered and missed by all who knew her.

The family would like to thank her good friends Maureen & Joanne, the staff at Westwood Retirement Resort and Kelowna General Hospital for the compassionate care our mother received during her last years.

At Rose’s request, there will be no service. In lieu of flowers, memorial donations may be made to the Canadian Cancer Society or a charity of your choice.