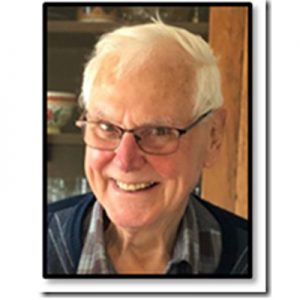 Hans was born in Brasdorf, East Prussia, on August 29, 1934.  He was one of eight children of Hans and Wanda Witt, a family who was deeply involved in the agriculture community.  At the outbreak of WWII, Hans’s life changed in ways that would shape his character and career, and which would influence the legacy of tenacity that he left his family.

In 1945, Hans, his six sisters, younger brother, and their mother fled to Schleswig-Holstein, where they were settled on a farm.  There, Hans completed his schooling and began an apprenticeship as a tool and die maker.

In 1955 the family, sponsored by the Mennonite Church, was able to immigrate to Canada.  The journey, for a young boy, was traumatic.  Despite this, he was resilient.  They settled on a farm in Virgil, Ontario, and this became home for a single mother with a very large family in their new country.  To support his family, Hans quickly obtained work as a newspaper truck driver.  Later, based on the excellence of his German apprenticeship, he was hired at GM as a tool and die maker – a job which required precision.  During this time, he also took courses at night to learn English and qualify for university, and his hard work saw him enter medical school.  He became a family doctor and then specialized in anesthesia – a career which also required precision.  By this time, he had married Nancy McAdam and they lived in various towns in BC with their two children, Heidi and Jonathan.  Sadly, his marriage did not continue.

In 1994, Hans returned to Toronto, Ontario and began working in the field of psychotherapy, a testament to his passion for lifelong learning. After a career into which he had poured his full heart and fine mind, he retired in 2005, because of love. On a visit to Kelowna, British Columbia, he met Ela Jackel and their beautiful relationship began. In short order, he decided to move to Kelowna and he and Ela were blessed with a loving relationship for 15 years.  Hans enjoyed playing bridge and was a passionate gardener. He and Ela were active at the German Club and thoroughly enjoyed the Seniors’ dances in Rutland.

Hans’s legacy is education in one hand, and family in the other.  As a young immigrant, hearing his mother’s words that “education will save your life” when home and country are gone, he took night classes while working to support his family.  He became a medical doctor, practicing anesthesia and psychotherapy. Indeed, he is a role model for anyone whose life circumstances are challenging.  His passion for lifelong learning was powerfully evidenced when he became a student once more and, at age 82 at UBCO, achieved his dream of attaining a BA. His love of learning is indeed a legacy he leaves the next generation of family. And in the same breath, it is family which grounded Hans. He traveled far and wide with Ela regularly to nurture the connections with family, and we all agree “Hans showed up.”  And in this, he role modeled the value of showing up. Family was everything to him, and we who follow him will benefit from the wise ways he prioritized relationships, ones that we can count on in good times and in hard times.

In 2018, he was diagnosed with cancer.  He underwent surgery and radiation in hopes of returning with strength to the life he loved with Ela, but in December his health challenges increased. He died peacefully at Hospice House on January 21, 2020.

In lieu of flowers, donations may be made to Kelowna Hospice House, hospicehousekelowna.com, or Christ Evangelical Lutheran Church, christevangelicallutheran.com.

A Life Celebration will be held on Saturday, January 26, 2020 at 2:00 pm with Pastor Patricia Giannelia officiating at Christ Evangelical Lutheran Church, 2091 Gordon Drive, Kelowna, BC.


The service for WITT, Hans is scheduled for Saturday, January 26, 2020 at 2:00 pm . Below you will find the map for the service location and the contact information should you have any questions.