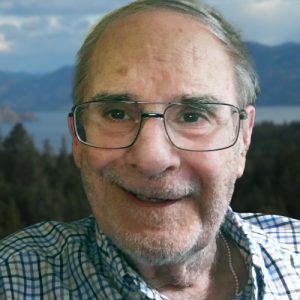 David Wood, age 81, passed away peacefully in Kelowna General Hospital on January 7, 2023. Dave leaves behind Dorothy, his wife of 52 years; his children, Maureen (Don) Engerdahl and Charles Wood; and his grandson, Alex Engerdahl; as well as his two brothers Lynn (Carrie) and Doug, and their families; and his many cousins, especially his Cousin Bonnie and her daughter Marja.  He was predeceased by his father, Chuck, and his mother, Louise.

Born in Red Deer, Alberta in 1941, Dave grew up in Edmonton, AB and Calgary, AB.  In his youth he was active in sports, scouting, and in church youth groups including Surprise Lake Camp.

Dave attended the University of Alberta, where he received his Bachelor of Education and later is Masters of Library Science. He taught in Edmonton and Hinton, AB, where he took on the role of Teacher Librarian.

Dave and Dorothy married in January 1970, and Dave took on the role of father to Dorothy’s daughter, Maureen. A son, Charles, was born to them in 1971. Dave moved to Hinton in January 1981 to take a position at Mountain View School, with the family joining him in August. He enjoyed his life in Hinton, participating in cross country skiing trips, refereeing hockey & ringette, Dramatic Society performances, Foothills Male Chorus, and Seniors’ Choir. He was a devoted member of the Masonic Lodge in Hinton, taking on many roles with their group. He was also a beloved Bridge player at the Good Companions Hall. Dave had also been a voracious reader, all his life.

Dave and Dorothy moved to Kelowna in 2014, into the “Château” that they called home until health issues required them to live apart. Well liked by colleagues, friends, and members of his communities, Dave will be missed by the many who loved him.

Memorial donations may be made to the Hinton Ringette Association.

A Memorial Service will be held in Hinton in the spring.