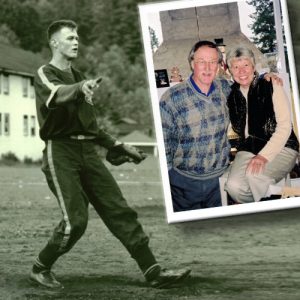 The memory of Pat will be carried by his children Melanie (Ross) & Donald; his grandchildren Nicolas, Christopher, & Danielle; as well as his great-grandchildren Bella and Cain.  He goes to join those who have gone before: his loving wife of 64 years, Marilyn Wood; his parents Adam & Florence; his brothers Dennis, Owen, & Burnette; as well as eldest daughter Jill.

Born in Vancouver, BC, Pat studied chemical Engineering at UBC and graduated in 1956. He worked as a chemical engineer until 73 years of age. His passion was chemical engineering.  Pat worked many years for Imperial Oil refineries located near Sarnia, Ontario.  This is where he met his wife to be, Marilyn on the beach of Lake Huron.  They raised their family of 3 children in Sarnia, Ontario, and later in Edmonton, Alberta. While in Sarnia, Pat inspired his family to be very active in sports; taking his family on many downhill ski holidays, camping trips across Canada, and providing memberships at the Sarnia Riding Club – tennis and swimming club on the Lake, as well as the Sarnia Golf and Curling Club.

Thankfully, in his retirement Pat had many passions, including downhill skiing until the age of 80, cross country skiing, until age 83, as well as being an avid golfer until age 84.  Pat and Marilyn enjoyed many years at their ski & golf place located in Kimberley, BC, as well as many years of golfing at the Harvest Golf Club in Kelowna, BC. Patrick was also an avid fly fisherman.  An active and involved father and grandfather, Patrick taught his children and grandchildren the value of education and to be critical thinkers.  Patrick’s intelligence, energy and uniqueness will be missed.  Pictured above is Pat as a teen actively playing baseball in the town where he grew up in BC and Pat with his wife Marilyn (nearly celebrating their 65th anniversary on December 21).

In lieu of flowers, donations may be made to the Canadian Wildlife Federation, in honour of Pat Wood.

No formal service will be held, however the family will conduct a spreading of the cremated remains ceremony in the future.