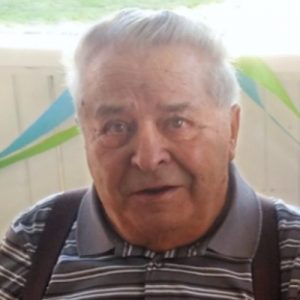 Vince passed away peacefully at the Kelowna General Hospital on April 23, 2022, at the age of 90 years. Vince is survived by his loving wife of 64 years, Anna, who he lovingly called his “Silver Fox”.

Vince was born and raised on the family farm in Sifton, Manitoba. He was the youngest of eight children. He left home at an early age to find work in Ontario, where he started working in road construction. While there, he met his very special lifelong friends, Joe and Kaye Lange. The three of them moved to BC in 1955 to work highway construction through the mountains. He met the love of his life when he met his waitress at Roxie’s Café in Vernon, BC. They were married shortly after and started their new life in Chilliwack, BC. The following year, they welcomed their new baby boy, Ron. They lived in Jasper, Columbia Ice Fields, and Snaring River in a small two-room cabin where Anna cooked and baked on a Coleman stove, washed clothes on a washboard, and grew a garden that the deer loved. Life was hard but they were happy. They moved to Kelowna, BC in 1962 and bought their forever home in 1966. They welcomed their daughter, Karen, and their family was complete. Vince continued working in road construction as a heavy-duty equipment operator, foreman and ended his career in 1966 as a superintendent. Vince enjoyed his work in the mountains and was always curious about the changes on the highways when anyone visited.

Vince was known for his “cheeky smirk” which always warned you that he was up to something. He enjoyed puttering around the house and working on his yard, which was his pride and joy. Papa loved spending time with his children, grandchildren, and great–grandchildren whom he gave very cute nicknames. He loved playing cards and cheating at Wizard. He enjoyed taking everyone on drives through the car dealerships, checking out all the new vehicles. Vince especially loved his Ukrainian music. They would often go to dinner and dances with friends, where he would do his little wave at his Silver Fox to come and dance.

The family would especially like to thank Julie Loverin of Renal Services for all of her support. Your kindness will never be forgotten. Also, a big thank you to Sam on Triage 1 and the 6 West nurses for their care.

In lieu of flowers donations may be made to: KGH Foundation Kidney Care – Renal Services 2312 Pandosy Street Kelowna, BC, V1Y 1T2.

There will be a Celebration of Life service held in the summer to honour Vince’s memory (date and time to be announced).