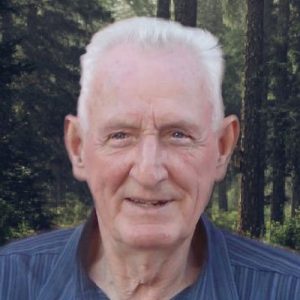 A Celebration of Life SATURDAY, DECEMBER 4, 2021 at 1:00 PM (PST), at Springfield Funeral Home, 2020 Springfield Road, Kelowna, BC, with Pastor Craig Tufts will be officiating. Unvaccinated friends and family are welcome to attend, however to adhere to Covid-19 restrictions, the number of attendees will be limited and required to wear a mask. If you wish to attend, Please Click Here to Register.

If you are unable to attend in person, please join the family online by Livestream (see below), same time as above, a recording will be made available to view shortly thereafter.

Les went peacefully to be with the Lord, while surrounded by his loving family, on November 3, 2021, at the age of 86.

Les Younghusband was born in Melfort, Saskatchewan on July 29, 1935, at his parent’s farm. Les is the third oldest of his five siblings: Gordon, Glen, Lauriel, Bruce, and Neil. The family relocated and arrived by train in Summerland, BC in the early 1940s. After graduating from high school, Les attended Forestry School and made it his lifelong career. He lived in many towns throughout British Columbia and settled in Golden, BC, where he raised his family of three children with his first wife Joan  Younghusband (Symonds). After the unexpected passing of Joan in January 1996, Les met Ruth Camenzind and remarried in 1999. Les and Ruth lived in Golden for several years after their marriage and returned to the Okanagan to live in Lumby, BC, until 2019 when they moved to Vernon, BC. Les spent his final months living in Lake Country, BC.

Les was a highly involved church member throughout his life; he loved the Lord and his strong faith gave him reassurance and a purpose in life to serve and love others. He selflessly dedicated his time as a volunteer for many years at the North Okanagan Valley Gleaners in Lumby, BC, where he provided food aid and gathered medical supplies that were shipped around the world to countries in need. The other volunteers at the Gleaners looked up to Les for his leadership and strong devotion to this wonderful cause. Throughout his career as a Forester, he was conscientious in his work and always went the extra mile to show love and kindness to his colleagues and the forest.

He was an exemplary husband and father, building the family house in Golden to provide a warm and loving home for his family. He was a thoughtful and caring man, a good listener, and concerned for all the people he met. A quiet man who loved hiking in the wilderness, finding remote lakes for fishing, camping and Rving, travel, nature, and making birdhouses. He was a charitable giver of his time and money, who never asked for anything in return. He will be deeply missed by all those who knew him.

Les is survived by his wife of 22 years and 8 months, Elva Ruth Camenzind; his children John Edward (Auriel), Kimberley Anne (Alan), and Christine Nicole (Andrew); grandchildren Brayden, Hayley, Abby, Lucas, Nolan, Stella, and Miles; and his siblings Glen and Lauriel. He was predeceased by his parents Norman Douglas Younghusband and Olive Ada James; his first wife and mother to his children, Joan Bethea Younghusband; and his siblings Gordon, Bruce, and Neil.
Our family wishes to thank our step-sister, Sandra Kenefick who was especially helpful to Dad in his time of need.  We would also like to express our gratitude to the caring staff at Lake Country Lodge in Winfield, BC, who cared for Les during the last 7 months of his life.

In lieu of flowers, donations may be made to World Vision Canada or North Okanagan Valley Gleaners.


The service for UPDATED SERVICE INFO – YOUNGHUSBAND, John Leslie (“Les”) is scheduled for SATURDAY, DECEMBER 4, 2021 at 1:00 PM (PST). Below you will find the map for the service location and the contact information should you have any questions.