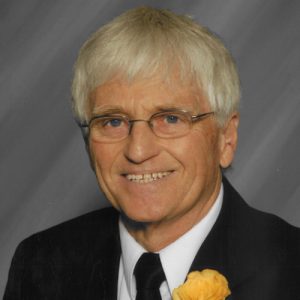 Our Dad, Ronald Victor Zerr, was born in Saskatoon, SK on May 12, 1948, and he passed away at home with family by his side on September 10, 2022. For the first few years of his life, Dad grew up on the Zerr family homestead just outside of Allan, SK. He moved with his family to Saskatoon at the age of 8. Ron was the oldest son of Joseph and Helen (née Garman) Zerr. He had two siblings, his brother Larry and sister Brenda. With a 16-year age difference between Ron and Brenda, Ron was a father figure for Brenda.

Ron became blazing fast, compensating for his mouth that was much bigger than his stature. He spent most of his early years getting himself into trouble and out running anyone who tried
to hold him accountable. His years of running translated into a glorious athletic career. Excelling as a high school athlete in football, baseball, and track and field. Ron was part of record-breaking sprinting teams at the U of S. While playing with the Saskatoon Hilltops just after high school, Dad was diagnosed with kidney disease. Over the next few years, his life would change forever.

Ron persisted in his rugby and athletics despite his diagnosis and kept pushing his body despite the disease. While playing rugby, Ron mentioned to one of his close friends that he needed someone to type his university paper that was to be handed in the next day. His close friend, David, suggested he call his little sister Carol, thinking she could help him out. Carol did indeed help Ron and the rest is history. Little did they know that introduction would lead to over 50 years of love and devotion. Ron and Carol were married on July 7, 1973, this past July celebrating 49 years of marriage. Ron and Carol’s love and devotion to one another will last until the end of time. It was truly the most beautiful love story. Carol was the love of Ron’s life.

Together they shared in the joy of having one daughter, Amanda, one son, Ronnie, and one adopted daughter, Alex. Meeting Carol, daughter of David & Margret (née McGinlay) Fehr, was the best thing that ever happened to Ron. Being able to share his life and love with Mandy, Ronnie & Alex was his greatest joy. He absolutely cherished his kids.

Ron turned his running from his early years into a record-breaking track career at the U of S where he graduated with a Bachelors degree in Physical Education in 1971 and then a Bachelors degree in Education in 1972. Even after his own running career was over, Ron invested his time and energy coaching track and field at the U of S with his good friend and mentor Lyle Sanderson. In 1976, the two coaches were named “co-coaches of the year” in the Canada West Conference.

In 1977, Ron’s kidney disease began to take its toll, and he had to begin dialysis. Without a transplant, Dad’s life was going to be cut short.

Dad was offered two transplant opportunities; he refused the first one without telling Carol, because he was having a hard time accepting this was his reality. With his son Ronnie having just been born a few months earlier, Dad received his second offer for a kidney for him. This time he was convinced by Carol that he had to accept it. After the amazing team of doctors got the kidney functioning on the operating table, 24hrs after surgery the kidney stopped working. Dr. Marc Baltzan (Dad’s specialist and surgeon) came to Carol after the 9th day of the kidney not functioning, and said tomorrow morning we will have to remove the kidney because it’s not functioning. Dad’s prognosis at this point was not good, as Dad would not survive much longer on dialysis.

Having Mandy who was 2 years old and Ronnie, a new baby, Carol went home and prayed all night long. She asked the good Lord to give Ron to her and their kids for 10 years. Just 10 years, then she could handle it. In the morning, Carol went to the hospital and the doctor said he couldn’t understand it, but Ron’s kidney started working sometime through the night. It was a true miracle.

As a young family, Ron and Carol spent most of their days and all of their holiday travelling around to Mandy and Ronnie’s sporting endeavours. Sharing in the joys of their successes and helping to carry them through the challenges that come with competitive sports. Teaching them how to celebrate, preserve, and build character.

Ron began his 36-year teaching career at Vanier Collegiate in Moose Jaw, SK in 1972. In 1975, Ron began teaching in the Saskatoon Catholic school division. Ron retired in June 2008. Ron’s passion for coaching served him well as a teacher. He was able to develop a record-breaking track and field program at Holy Cross High School. Holy Cross went on to win 22 straight city championships in high school track and field because of the program that Ron was instrumental in establishing. Ron also coached football and baseball for many years. Investing his life in the development of numerous young men and women. Many who went on to international, professional, and Olympic success.

Ron obtained his Master’s degree in Educational Psychology at the U of S in 1985. Using the wisdom he gained from that accomplishment, Ron translated his passion for young people into a program for struggling students. In his later years of teaching, Ron was an instrumental part of developing this program that focused on creating safety and community at school for struggling students to help them stay in school. Dad’s embodiment of these values empowered students, knowing they had an advocate helping them reach their goal, both in and out of school. Ron helped mentor these students and supported them in overcoming the difficulties that life had thrown their way. Ron spent his last years of teaching at the U of S, teaching in the College of Kinesiology. Over the decades, Ron taught for more than 20 years at the U of S in the College of Kinesiology.

Ron and his love, Carol, took their passion for family and moved to Kelowna, BC in 2012. This allowed Ron to continue to invest his life in the next generations. Ron and Carol were able to be near their son Ronnie, his wife, Janelle, and their growing family, that included their grandsons Caleb 15, Jaden 13, Traeton 11 and Ronald (Rhys) the III 1.5. Kelowna also became home for Alex and her husband, Luke VanDuyvendyk, as they travelled out west to pursue Alex’s career as a doctor.

In the last decade, Ron and Carol were able to travel overseas to Denmark on several occasions to visit Mandy and her wonderful family of Danish-Canadians: Mandy’s husband, Rasmus, and their 5 beautiful children Rasmus Victor 11, Bjørn Valdemar 8, Malthe Ronald 5, Sommer Sofie 3, and Josephine Caroline 1.

Being able to share in his families’ lives and accomplishments brought Dad more joy than he could express.

We loved him for his spontaneous puns and witty sense of humour, always making us laugh (and, think about how that pun actually made sense). Dad was generous with his compliments and telling us how much he loved us. Always telling us “You’re looking good”, and “I love you pal/muscles/big guy” (or whatever his nickname was for you) right up until the last times we talked to him. Dad’s generous heart, his willingness to teach and support us in all we pursued, with unconditional love, help us to grow and become the people we are today. His desire to see us achieve, and overcome, and ultimately thrive, is part of what gave him the strength to endure the physical pain he had – to be with us, embracing us all dearly, right until his last breath.

We appreciated his love for sports and how he always wanted to coach us (in a way that made us better at what we were doing, better at knowing what it was that we needed to improve). Ultimately, everything he instilled in us made us better people.

That’s what Dad did. He made you better, he helped you see: the worth, the ability, the potential, the value, you possessed and he called it out of you. Never letting you settle for anything less then what you were able to fully offer the world around you. He offered his everything to so many of us, his time, his experience, his expertise, his devotion, his commitment, his passion, and most of all his love.

He was our hero, our coach, our mentor, our friend. Most of all, he was our Dad.

He taught us how to live with passion, how to give of yourself to others, how to recognize and appreciate true wealth, how to prioritize people over things, how to embrace humility, how to honour your commitments, how to have a sense of humour, how to work hard, how to stay the course, how to take care of those who have been entrusted to you, how to overcome, and most of all how to love.

He was the most mentally and physically resilient person we have ever known.

We (and I know so many others) will be forever grateful for the extra 44 years we were given to experience life with this man as our mentor, our hero, our dad. Thanks Dad. We love you until the end of time.